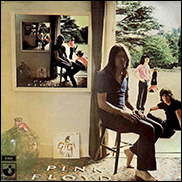 Their Syd Barrett LPs made nary a dent in the U.S. Most people first heard "See Emily Play" when David Bowie covered it on "Pin Ups." But when the crazy diamond was gone word started to spread, Pink Floyd were testing limits, in an era where that was admired, unlike today, where life is so hard that anybody with any success just repeats himself, and the wannabes imitate what's on the hit parade.


So I bought "Ummagumma" and didn't really get it. I didn't find it offensive, it's just that I didn't want to spin it ad infinitum, in an era where money was precious and if you bought it you played it until you knew it.


And then I viewed Pink Floyd from afar, I saw their albums in the record store bins, but I didn't buy them. It seemed the act was a curio, doing their own thing to a marginal audience. From "Ummagumma" to "Atom Heart Mother" to "Meddle" to "Obscured By Clouds" and then…


I was going to college in Vermont, there was no radio, unlike today if you were living in the hinterlands you were truly out of it. Except for the rock press, "Creem" and "Rolling Stone," they said Pink Floyd had a hit.

This was impossible. They'd given it multiple tries. Why now? Why did the punters suddenly embrace this left field act?


The cash register rang, Storm Thorgerson's images covered the bandshell and it was one of those transcendent moments that you could never foresee that made you tingle and feel fully alive.

You see there was barely a more played track in the seventies. Every city you went to, every time you turned on FM radio, you heard "Money." There was a level of ubiquity far outstripping the tunes of today, and when Gilmour and band laid into that bass heavy groove it was positively shocking, it was like having your best friend from school walk through the door completely unchanged, HOW COULD THIS BE?


And unlike the fearful acts of today, nothing was on hard drive, and unlike Bob Dylan, Gilmour saw no need to rework the number to satisfy himself, he played it just like the record.


The bass was emphasized, the sax solo was alive and present, and he was WAILING on the guitar.


"Wish You Were Here" came before that.


This got nowhere near the airplay "Money" did. But remember when the Twin Towers collapsed, when life in these United States stopped? Jimmy Iovine rallied a retinue of stars for a concert while we were all still in shock, Fred Durst and Johnny Rzeznik did "Wish You Were Here." Both of them have been forgotten today, they're period pieces, but not only does this song live on, it was the most fitting number of the evening. That's the power of rock music, that's the power of classic rock, that's the power of Pink Floyd, "Wish You Were Here" was not momentary, not a ditty to be digested and discarded but something you pondered and embraced, that became part of you. And it wasn't only those who were there, but those who came after. Gilmour's version was faithful to the record, the highlights were the picking and the nonsense vocalizations he replicated, no one does that anymore, gives us what we want, the way we heard it originally, it ended too soon, it could have gone on all night.

And, of course, there were new tracks, that was the reason for the show.


David Crosby's vocalizations made them special, but that was not what people came to hear.


Then again, it was a somnambulant audience, they'd stand and applaud after one of the Floyd numbers, but they never really got into it…


"They're gonna send you back to mother in a cardboard box"


They just didn't wait long enough. Because at the end of November, the 30th to be exact, right after Thanksgiving, Pink Floyd dropped a double album so big it made the assembled multitude forget about corporate rock, Steve Dahl was just a memory, everything was plowed under by the "Wall."


Imagine if Adele's music meant anything, stood for something, and her latest album was released with a tenth the hype and ended up being heard EVERYWHERE!


Sure, "Dark Side Of The Moon" never fell off the chart, but although successful, the albums that followed it were nowhere near as big, no one expected Pink Floyd to dominate at the turn of the decade.


"Another Brick In The Wall" got incessant airplay. All we hear today is education rules, our nation is run by people who jumped through hoops, but it wasn't this way in the classic rock era, instead we got not nincompoops, wet behind the ears idiots like Justin Bieber, but self-educated men and women who questioned authority, all the established precepts, to be an individual was key, today everybody just wants to be a member of the group.


And for years thereafter, when the station had time to kill, running up to the news, they'd play "Run Like Hell," it's the most famous near-instrumental you're aware of but don't know.


Like all the Floyd hits, they were incessant presences in our lives.

Now you've got to know the production Thursday night was spectacular. Not only were there Storm Thorgerson's graphics, but Marc Brickman's lights, he got an extra 250k to make it exceptional, this was not the same show you saw indoors, this was SPECIAL!


And Phil Manzanera is picking notes, there are three backup singers and two keyboard players, but the man at center stage was the star.


Clapton can't even play "Layla," maybe because those notes were picked by Duane Allman.


And so many have trouble replicating studio excellence live.


But Gilmour was making those guitar strings squeak, notes were flying out of his axe like lightning bolts, the drums started to pound, this was RUN LIKE HELL!


I jumped up. I couldn't help it. This was unexpected. I figured he'd do "Comfortably Numb," which he did. Sure, it was cool to hear "Astronomy Domine" and "Shine On You Crazy Diamond," but "Run Like Hell" is rarely mentioned as sitting atop Pink Floyd's canon.


And it took a while for the audience to recognize it, to wake up from sleep after digesting their picnics, but the sound spread, the space became electric, everybody rose to their feet in sheer wonderment, at this seventy year old who seemed not to lose a step, who wasn't showing off, but seemed deeply entranced in playing this number that's part of our DNA, that sets our minds free, that separates you from me, illustrates we're all individuals, trying to survive, trying to make our lives work.


And you can turn it up to eleven at home, but you'll never experience the power, the assault that it was on Thursday night.

That's where we heard this music, in our automobiles, privacy ruled, there was a direct link between the musicians and us, everywhere the tunes played, they rode shotgun, they gave guidance.


Parents didn't let girlfriends sleep over. Mom and Dad were clueless enemies. We were inventing it as we went along. You didn't save yourself for marriage, rather you searched mightily for experience.


We're afraid of being left behind, but we're anesthetized by Netflix, communication is done on Instagram, whereas going to the gig used to be a tribal rite, it was the best place to find like-minded people.


And sure, we liked to zone out.


But we knew the future was in our hands. And nobody was gonna help us out. Institutions were not to be trusted, corporations were the enemy.


And the biggest stars in the world were musicians.


This was pre-MTV. The average person couldn't pick David Gilmour out of a lineup.


But when they heard his guitar come out of the speaker, they knew exactly who it was.