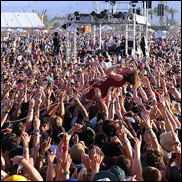 It's about the experience.

Which is why the rockers and the rappers just can't understand it. Never mind the labels and the traditional concert promoters, who seem to have finally woken up.

Think about this. If you grew up playing soccer, not baseball or football, despite those sports getting all the mainstream press, and you got a trophy just for participating, would you really be desirous of going to the mainstream show and sitting in the audience, separated from the act by barriers and security guards, never mind being unable to score a good seat without sacrificing a few months of your college loan payment, which your parents have been making since you moved back in after graduating?

That's what rock got right, before it became about the dollar signs, which is where it's still at.

And rap was always about money, but if you don't think hip-hop grew a surrounding culture, you haven't walked out the front door in decades.

But the problem is these two genres keep repeating the formula, expecting the same result. Which is kind of like hiring the '56 Yankees and expecting them to win the World Series. Sure, today's athletes take drugs, but unlike their predecessors, they work out incessantly, they're incredible physical specimens, that's what you've got to do to compete.

And there are rules in baseball.

But there are no rules in entertainment.

Other than you make an album, ensure there's a radio hit on it, and then sell the result on a slab of plastic for almost twenty dollars list. And when the public soured on this, the only discussion was how to bring them back to the well! As if the labels were selling something necessary, like water, when all they were doing was overhyping the remnants of a dead culture.

And sure, electronic music seems to have burgeoned overnight, but really it's been percolating for decades. Take that all you teen phenom wannabes.
Turns out that to grow into a lasting master, you've got to practice your craft in obscurity, be thankful your tiny cult appreciates you, and be shocked, positively shocked I tell you, when your enterprise goes mainstream.

It's kind of like the days of yore. When a band broke on the third or fifth album. There was a hard core who'd been there from the beginning, pissed that everybody was now sipping the elixir. But who could deny the greatness?

And you wonder why festivals are today's live entertainment kingpins.

Because it's not about the talent so much as being there.

Today's kids know everybody. The era of going to the show and standing in the corner alone, knowing only the band, are done. Via social networks, every kid in your town knows every other one. And these festivals are giant networking parties, where they get to mingle and have a good time. And it's all about the good time. Sure, the music is an element of the mix, but if you could go to the show with only ten of your best bros, you wouldn't.
Nobody wants a legendary DJ to play for ten people like the oldsters hire Elton and the classic rockers for privates, that's a dead scene. They want to be party with thousands, they want to feel the energy, electronic music is not about being exclusive, but inclusive!

Think about that. It's the opposite of the rock star ethos wherein I make it and I leave you behind, I fly private and I pay you lip service but I want nothing to do with you. The deejays are all regular people. It's stunning how normal they are, other than the wear and tear of the travel. And they like the money, who wouldn't, but spinning doesn't seem to be a stepping stone. Everybody in straight music wants to be something else, a TV star, a clothing magnate. Deejays want the endorsements, but mostly they want to entertain, they want to motivate the crowd.

And this does not mean this electronic scene is forever. Oh, the music will last forever, like the blues, only bigger. But in a world where Carly Rae Jepsen can have the song of the summer and be an obscure footnote not even twelve months later, anyone predicting any fad will last is out of his mind.

Yes, electronic music is a fad. Then again, rap is a fad that lasted decades!

But what's important is the scene. The inclusivity referenced above. Now performer and audience are in it together. That's why you Facebook and tweet and Instagram, that's where your people are. And if you don't see yourself as one of them, you're going to be in big trouble. If you think the old star system is the new one, you've never been to an extreme sports competition, where the losers are hugged and embraced as much as the winners.

So if you want to succeed in the new world of entertainment, you'd better let your audience inside. You'd better make it easy for them instead of difficult. You'd better not put on restraints, alienate them, accuse them of undermining you, like the RIAA did by suing file-traders. The RIAA is a lobbying organization, it's about protecting corporate interests. Whereas entertainment is about going with the flow.

But the punks still think it's about tattoos and piercings. About being anti.

Anti is history. You may not have gotten the memo, but we're all in it together. Politics may be divisive, but entertainment culture is all in.

And yes, all these festivals have VIP experiences. There is a caste hierarchy.

But you don't need to be rich and famous to have a good time.

Being in the back with your buds dancing is just as fine as being inside the velvet rope, oftentimes it's better. That's where your friends are, that's where the opportunities are. You're not looking for anything connected with money, rather you're looking for raw connection. The music is just the grease.