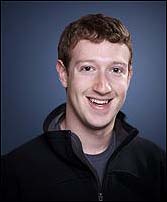 "This past spring, Facebook introduced what Zuckerberg called the Open Graph. Users reading articles on CNN.com, for example, can see which articles their Facebook friends have read, shared, and liked. Eventually, the company hopes that users will read articles, visit restaurants, and watch movies based on what their Facebook friends have recommended, not, say, based on a page that Google's algorithm sends them to. Zuckerberg imagines Facebook as, eventually, a layer underneath almost every electronic device. You'll turn on your TV, and you'll see that fourteen of your Facebook friends are watching 'Entourage,' and that your parents taped '60 Minutes' for you. You'll buy a brand-new phone, and you'll just enter your credentials. All your friends – and perhaps directions to all the places you and they have visited recently – will be right there.

It's hard to make sense of the world.

Used to be there was a dearth of information. I remember going to college and being bored. That would be impossible today. What with every movie and song ever created at my fingertips on the Internet.

But with so much information available, people are overwhelmed. They can't make sense of it.

Old wave media players, especially newspapers, have a hard time with the emergence of this new world. News used to be scarce. The paper in each town determined what was news and it was all you got, you couldn't go online to get additional details or the opinion of a blogger.

Record labels are especially frustrated. They controlled what was exposed and sold. Now interlopers are taking over. Labels say it's about P2P theft, but really it's about loss of a monopoly. The labels controlled mindshare. Now they barely control anything.

The labels will tell you that only one in ten albums hit, that there are no guarantees. A youngster will scratch his head and ask if I'm the best, why don't I make all the money?

Old wave media believes it's entitled to its place atop the heap, that it deserves all the eyeballs. And to maintain this position, old wave media alternately complains and hypes. Imploring everyone to pay attention. Those sold out to the old game can't understand those who no longer play it. Randy Phillips thinks everyone's heard "Empire State Of Mind". He's got statistics to prove it. SoundScan, MediaBase, ticket sales. But the real story is millions of people don't know the track and don't care. They don't feel out of it in the least. Rather they're burrowed down in their own little satisfying holes.

Hipsters don't like the new world either. They might be poor, but they got satisfaction in not only delineating trends, but making fun of those oblivious to them. Now there are so many trends that people are proud to be oblivious. I'm a nerd, how would I know that!

More and more people are abandoning the mainstream circus/game. Could it be any more frustrating to read the newspaper on a new act? Why this one? Why is there no criticism? You can go online and find out from a fan exactly what the music sounds like and whether it's any good. Why would you waste time with a newspaper? Reporters will tell you about J-school. About being fair and balanced. But would you rather read the reporter's take or the one from the person who lived it? Would you rather talk to Irving Azoff or Ann Powers?

Irving was on Twitter for a while. He seems to have given up for now. But he's got in excess of 10,000 followers. They want to hear it from the horse's mouth.

But the excision of the middleman is not the only important trend. Even more interesting is these new micro-worlds, which Zuckerberg is trying to create with Facebook's Open Graph.

We're living in a Tower of Babel world. There's too much input to make sense. But what if we could all move to a country of our own choice, with like-minded people? That's the change that's happening.

I'll make it simple. Zac Brown fans don't care what Jay-Z says. Oh, of course there could be some cross-pollination, but the point is we're in a very different era from the sixties or even the MTV years, when multiple genres of music existed side by side in a scarce medium. Today, you go directly for what you want, screw the rest.

And you find out what you want from your friends. They provide the context!

Your friends tell you the news you're interested in. You want to go to the movies they do, so you can have discourse about them. You buy the cars your friends approve of. The world in general? Who cares!

So as major media corporations try to go ever broader, the audience is going ever-narrower. And these niches are hard to penetrate. Because they don't like interlopers and they abhor hype.

Your only hope of penetrating a niche is via trust. Which is established slowly.

You've got to get one fan, who turns on another.

Inherently this is slow. Because if you go too fast, try to get everybody to listen to the first album instead of making a second to satiate the core constituency, your hard core fans abandon you.

Everything's topsy-turvy! It's not about controlling customers, but earning their trust and then super-serving them with what they want, which might be completely different from what another group wants.

You might be able to unite niches in the name of charity. Or maybe even politically. But the future is not about growing together, but separating.

In other words, there are no more diamond sellers not because of P2P theft, but because not enough people are interested!

We always try to make sense of our environment. Now we do this by going online, connecting via BBM. Hearing what our friends have to say, what they're interested in. We don't trust the old media behemoths and we're immune to advertising.

It's a brave new world. Social media is not about posting useless trivia, as the old wavers constantly claim, but connection with the information we need to feel knit into the fabric of society/humanity.

The computer/Internet just made it easier to do what we always wanted to do. Connect. And now that we can connect, we want to comment, we want to collect data and make informed choices. We don't want to be dictated to.

We're all stars of our own movies.

But each and every movie has a cast.

In other words, your friends and your family is your audience. Be thankful they like your music. As far as spreading it further, good luck!

I'm not gonna listen to it. I don't know you and I don't trust you.

Everything's changed. But the new world is becoming clearer. There's still money to be made, but the marketing tools of yore pay fewer and fewer dividends, and their power will continue to decrease.