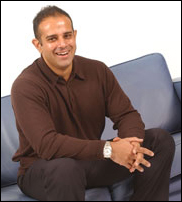 BIRMINGHAM (CelebrityAccess MediaWire) — The Board of The NEC Group, operator of five of the UK’s leading exhibition, music and event venues, including the National Exhibition Centre, National Indoor Arena and International Convention Centre, is delighted to announce the appointment of Paul Thandi as its new chief executive.

Thandi, aged 40, has exceptional experience of both the exhibition industry and The NEC Group, where he has held the position of Commercial Director since April 2005 and has been responsible for delivering the largest haul of new business in any one year in the company’s history.

He has been part of the executive board that has taken The NEC Group from strength to strength since the appointment of current Chief Executive Andrew Morris in 2004.

Acting NEC Group Chairman Gary Allen, who chaired the selection panel, said: "We were extremely impressed with the quality, range and number of applicants for this important post. The NEC Group has undergone a transformation in the last eighteen months. I am confident that the organization will be in excellent hands going forward under Paul’s stewardship."

Paul said: "It is a privilege to be given the role of leading such an iconic and high profile organization that is an important part of the fabric of the regional and national economies. Our venues welcome over four and a half million visitors each year to more than 1,000 conferences, exhibitions, consumer shows and concerts and deliver £1.3 Billion to the regional economy." – CelebrityAccess Staff Writers