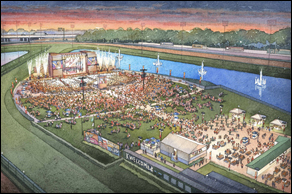 It will feature the Verizon Wireless Friday & Saturday Night Concert Series from June to September 2008, which includes free admission to racing events. Live Nation is their as their exclusive booking and marketing agent.

Concerts will take place in the infield of the race track after live racing events as well on non-racing nights. The all-ages venue features reserved seating and general admission for 9,000 patrons.

Summer line up so far: