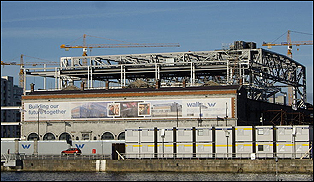 DUBLIN, Ireland (CelebrityAccess MediaWire) — When Live Nation's Point Theatre in Dublin went dark last year for renovations, it recorded operating losses to the tune of almost $4.5 million. The losses were exacerbated by the inclusion of a 1-time charge of 2.7 million to cover staff redundancies but offset by a $37 million land-sale, leaving the theatre about $34 in total.

According to a report by the Sunday Business Post, the venue shut down in August of 2007 for a $100 million refurb to turn the theatre into a custom-designed amphitheatre with "excellent acoustics and sightlines" and room enough for 9,300 seated, or 13,000 standing fans. Live Nation is anticipating booking more than 150 live events per Annam at the venue, the Independent reported.

The theatre also has a new name. When it re-opens, it will be called The O2, after the mobile phone operator secured a naming-rights deal for the theatre for approximately $30 million. The deal will allow the telco's 1.6 million Irish customers to order tickets up to two days ahead of the general on-sale dates.

The venue, co-owned by Live Nation and businessman Harry Crosbie was doing pretty well in 2006, clearing more than $1.2 million in profits. Last year

Set to re-open in December 19th with a Kings of Leon show, followed by Coldplay on December 21 & 22. Other acts on the calendar heading into 2009 include The Killers, Tina Turner and AC/DC to name a few. – CelebrityAccess Staff Writers