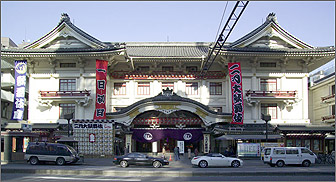 TOKYO (CelebrityAccess MediaWire) — The Kabuki-za Theatre, long-considered to be the heart of of kabuki in Tokyo will be torn down and rebuilt from the ground up in April, 2010, the theater's operators, Shochiku Co. announced.

The theatre, located in the fashionable Ginza district of Tokyo, was first opened in 1889 and has been rebuilt several times, most recently after being destroyed by allied bombing during World War Two. The building's design hearkens back to a architecture of the first Tokugawa shogunate and is considered to be one of the iconic buildings of Tokyo.

The theatre hosts live kabuki performances, a very popular style of of traditional dramatic theatre, on a near daily basis. However, representatives for Shochiku, the buildings operators Shochiku have noted that the building provides poor access for the disabled and elderly and have also expressed concerns about the building's ability to withstand an earthquake, a significant concern in Japan.

The rebuild is expected to take three years and during that time, kabuki will be moved to the Shinbashi Enbujo theater, the Daily Yomiuri reported. The Japanese Cultural Affairs Agency has indicated that the go-ahead for the demolition and reconstruction has been granted. – CelebrityAccess Staff Writers