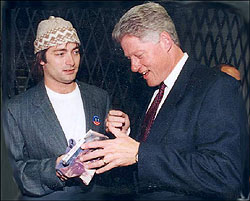 The Samples are survivors but desperate survivors. Group leader
Sean Kelly has asked the band's friends for help in a somewhat unusual
fashion. Even though their first six albums sold in excess of 1 million
copies collectively, their last half dozen CDs have minuscule sales in
comparison. Kelly is asking The Samples' fans to buy–at whatever cost
they feel like contributing–a laminate for The Lifetime Tour. The benefits
are not spelled out.

"The story within the story here is that Sean has had about 12 managers,
four agents, three record companies, three business managers and four
lawyers in the last 10 years," a former manager advised CelebrityAccess. "Did we all conspire to screw the guy over?"

The Samples are not unlike many other bands, but, at least, Kelly has made a plea for survival. CelebrityAccess reprints his plea:

Dear Friends: As you may or may not know there have been many
rumors swirling around that The Samples have disbanded and are
breaking up. To set the record straight, the band will go on, although
the line-up will include some new band members. One of the main
reasons for the departure of several of the members is because of the
unbelievable levels of financial and external stress surrounding the band
over the last several years. Personally, I would always combat the
external negativity by constantly touring in hopes that sooner-or-later
we would get some kind of monetary relief or "big break", but this never
happened.

What we did get in return however cannot be defined by
money or any other worldly form of validation. Instead we received
countless amounts of wonderful people coming to our shows regardless
of the fact that the concerts paid us little more than what it cost to
put them on. Through the years we could never afford a publicist, had
no independent radio support, record label interest, and most of all next
to zero recognition by mainstream media – feeling much like ghosts in
the music industry. We have sat back and watched lesser known bands
get the enormous amounts of recognition that now seem surreal to us,
almost like some sort of parlor tricks.

At times this has brought myself and The Samples to such levels of
sadness that the only thing keeping us going and validating our efforts
over the last fifteen years of incredible hard work recording and touring
has been you – the audience. Whether you have seen us or heard our
music while we were playing in Arizona, Texas, Vermont, Oregon,
Colorado, Florida, Illinois, Wyoming, New Mexico, New York, Alabama,
North Carolina, Pennsylvania, Michigan, Maine, Montana, New Jersey,
California, Kansas, Iowa, Ohio, Georgia, Connecticut, Indiana, Rhode
Island, Massachusetts, New Hampshire, Missouri, Idaho, Nevada, Utah
or Canada, it has been because of our love of music and our love for
our audience. Many people would probably guess that after selling more
than a million CDs of our music and after well over 250 tours of the
United States that we would all be on "MTV Cribs" showing off our new
houses and shiny cars. Nothing could be farther from the truth.

It's incredibly expensive to tour, and we have kept our entire
organization running since our inception with virtually no royalties from
the sales of our records to offset the costs of touring and to maintain
the daily operations of our band. I personally spent the whole year of
2001 without a place to call home, living in hotels or out of my bunk on
the tour bus while the band was on the road. I had a major foot
infection during the 2001 summer tour and had to go to the emergency
room, signing in as a transient since I had no physical address at the
time. My acoustic six string Gibson guitar, the instrument I make my
living with and write most of The Samples songs on actually hurts my
fingers to play because the action is so poor, but I have never been
able to afford the Martin HD28 I have always dreamed of owning. What
a difference that would make to the sound of my music when I am
performing live on stage, but purchasing a new acoustic guitar has
always been out of reach for me, a luxury which I could never seem to
justify financially.

The obvious question is how the hell could The Samples really be in
this situation? Over the years we have done our best to keep it out of
view of our audience. Even with everything we have accomplished to
date, poor management advice and bogus contracts have crippled us
financially. On limited resources, no matter how difficult it was
monetarily we did whatever we could to keep the music going, everyone
sacrificing to keep the band alive. I have personally given my all,
handling every aspect of this organization's operations from writing and
performing the songs, developing and stocking merchandise, creating
and maintaining our website, producing new records, planning and
staffing our tours, even running back to the tour bus while Andy played
an acoustic solo number during our shows so I could download pictures
of the audience from our digital camera to be projected behind the
stage when I returned for the next number. No matter how difficult
things have gotten, we have always believed in ourselves and the
power of the music – feeling in our hearts one day our ship would finally
come in.

Now myself and The Samples are at a cross road. We have
absolutely no financial resources to continue. We are trying to stay one
step ahead of the bill collector and are down to just faith as far as
continuing on as a band. At the end of the last tour, I felt like it was
time to end this ride, exactly like George Bailey in "It's a Wonderful Life."
I felt so deeply concerned and responsible for The Samples' debt,
overwhelmed by the pure senselessness of so much work and dedication
with so little monetary reward. For the last several months, in an effort
to pay our debtors in good faith it has been a stretch for myself to keep
up on paying my own phone bill and car insurance, not to mention
rent."

"Well, I fell into a dark place through the holidays and could hardly
get off the couch. Somewhere between doctor visits and threats from
the IRS to levy my small amount of personal belongings, I reached out
to a friend named Ralph Pastor or maybe he reached out to me. He
helped tremendously in nurturing not only my state of being but
restored the faith and confidence that had all but completely left my
soul for my contribution to the music world. Ralph is truly a man of
integrity, an eternal optimist and a long time Samples fan. He has
incredible ideas and hope for the future of myself and The Samples. He
also has great knowledge of business, something which I obviously do
not. He is helping to try to put in place all the components which we
have been lacking over the years like a financial planner and an
integrous legal team. Ralph is also diligently trying to settle all of our
debts and create payment schedules to eliminate our back debts and
create a strong and profitable business model from which The Samples
will operate in the future. But this is where we need your help and
support."

"We are reaching out to you, our fans, our purpose for playing, our
reasons for faith and hope, to give you the opportunity to not only gain
insight and understanding into our situation, but also to help us keep
this great music alive. There has to be a reason and a place for this
music even if it never gets heard in arenas, mentioned in any major
publications or seen on MTV. I truly believe that this music has to be
here if for nothing else, just for balance. So few bands are doing what
The Samples or myself are doing with such integrity, dedication, spirit
and soul for the pure honest sake of art and music. If it all ended
tomorrow I would live out my days with no regrets, but would feel
somewhere deep inside that our best days were always still ahead of
us."

"With that said we are asking for your financial support, whatever
that may look like to you. We are offering a special laminate which can
be found by clicking on the link below. It is a Samples All Access Pass –
The Lifetime Tour, allowing its owner to enjoy our music for years to
come. We haven't set a price for this laminate; rather we are asking
you to place your own value on its worth. Possibly some of you can
afford more, others less, but one thing is for certain – if The Samples
are to continue to make music in the years ahead it will be due solely to
your generosity with this initiative. Our arms are outstretched and we
are asking for your support."

"Click on the "Company Website Address" Link below to learn more.
Thanks so much for being a part of our music. By the way, Tom Askin
and I just finished another acoustic tour, and I can honestly say it was
one of the best tours I have ever been a part of, with standing
ovations night after night. Take care."