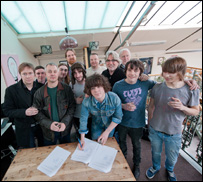 EDINBURGH, Scotland (CelebrityAccess MediaWire) — The Scottish Platinum selling four-piece The View, known for their pop-punk sound, have signed to Cooking Vinyl for a global services deal on their fourth album.

Produced by Mike Crossey (Arctic Monkeys, Razorlight, The Enemy, Tribes), the album is currently being recorded at the Motor Museum Studio in Liverpool, a hallowed hall in which creative sparks have flown for Grandmaster Flash, Oasis and Mark Ronson.

The as-yet-unnamed album is slated for release in July to be supported with a summer festival schedule broadening into a full UK and European tour in September and October this year.

Influenced by likes of Oasis and The Clash, the band began as a covers band in their native Dundee in 2005. Within a year Kyle Falconer (lead vox), Kieren Webster (bass), Pete Reilly (lead guitar) and Steven Morrison (drums) formed the band and were picked up by newly created Sony Music subsidiary 1965 Records, already well into the writing of their breakout album.

Hats off to the Buskers released in 2007 to critical acclaim, reached platinum sales and was nominated for a Mercury Music Prize.

The band stayed with1965 Records for another two albums Which Bitch (2009) and Bread and Circuses (2011) before being snatched up by Cooking Vinyl.

Commented Mike Bawden of Morse Code Management and Manager of The View, “it’s great the band have signed with Cooking Vinyl – great people with a great label and now with the addition of Britain’s most exciting pop-punk band, we cant wait to get going.”

“New label, new record being made in Liverpool with Mike Crossey. Gigs going in the diary – we’re looking forward to a great future with Cooking Vinyl…" says Kyle Falconer.