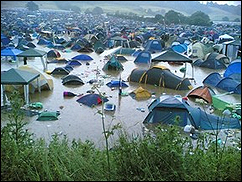 LONDON (CelebrityAccess MediaWire) — Legendary rock band The Who played the finale at the Glastonbury Festival over the weekend, performing before a record crowd of 177,500 fans, who endured rain and mud all weekend to see hundreds of acts.

Founder Michael Eavis told the BBC that he was impressed with the courage of the fans who rode out the entire festival despite the stormy conditions, saying that the weekend had “gone very, very well, in spite of the rain and mud.

“It’s a pity about the rain, but it seems to be a regular feature of the English summer, so the festival compensates for it,” he told reporters.

“Someone phoned me from Spain and said they would swap all the sun for the Glastonbury culture.”

Eavis told reporters that he has often considered changing the dates to try to avoid the rainy weather that seems to strike each year, but after looking at statistics found that “one weekend is no better than any other.”

Local governing officials kept noise levels down, despite the expanded concert site, prompting several festivalgoers to complain about poor sound from the Pyramid Stage, where the Killers’ set on Saturday was constantly interrupted by calls to “turn it up!”

“Have investigated further into the sound problems, I’ve been informed that very unusual meteorological conditions caused abnormally high sound levels outside the site,” Eavis said, according to the BBC.

“This led to our engineers being directed by the authorities to reduce the output from the PA system. The weather conditions over the site have been changing daily and the PA system and technical team were in no way responsible or at fault for the reported sound problem.”

Otherwise, all fans reported phenomenal stories and experiences from the festival.

Eavis tempted reporters and fans by announcing that the 2008 headliners have already been confirmed, but refused to reveal who they are, only saying, “It’s not Muse of U2.” –by CelebrityAccess Staff Writers