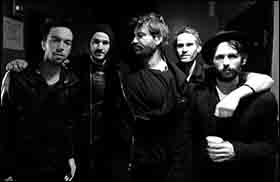 The band steered away from their more popular hits, playing some obscure back catalog cuts and using the opportunity to seemingly call out the Republican party for their stance on issues such as climate change and gay marriage.

Videos of the event show the band's singer Stephen Jenkins dedicating a song to his gay cousins and suggesting that conventioneers "take into your heart the message" and to "not impose your fear on other people."

In another instance, he asked the crowd "Who here believes in science?"

Another video showed fans booing the band, with Jenkins replying, "You can boo all you want but I'm the motherf—ing artist up here."

The Third Eye Blind performance was part of a charity concert that was put on by the Recording Industry Association of America to benefit the nonprofit group Musicians On Call, which stages bedside hospital performances for patients, according to Yahoo News. – Staff Writers