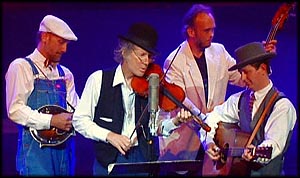 The "Down From the Mountain" tour will hit the road for the second time with a five week amphitheater tour kicking off on June 25. The tour is a joint production of Immortal Entertainment Group, United Talent Agency, Metropolitan Entertainment and House of Blues Concerts, Inc.

The first leg of the tour, which ran from January 25-February 20, stopped in 17 cities and sold out 19 shows from Lexington to San Francisco. It garnered glowing reviews, being coined an "unparalleled treat" by the Boston Herald, as well as "mesmerizing" and "heartwarming" by the Philadelphia Inquirer. The Toronto Sun stated that "There were too many highlights to list."

to the United States to perform their first shows in more than five years, the first since the death of lead singer Michael Hutchence. Kirk Pengilly (guitar, saxophone), Garry Beers (bass), Tim Farriss (guitar), Andrew Farriss (keyboard, guitar), Jon Farriss (drums) and featured vocalist Jon Stevens will kick off a 40-city tour May 30 in Anaheim, CA. The set list will encompass such INXS classics as “Need You Tonight,” “Devil Inside” and “New Sensation”–songs that are emblematic of the group’s hard-hitting funkified rock.

“Much of our career has been spent in America and Canada and it’ll be great to be back playing there again,” said Kirk Pengilly.

After the November 1997 death of Hutchence, INXS understandably took time off to consider their future–and if there would be one without Michael. Coming off 23 years of solid touring, the break also offered an opportunity for the group’s members to pursue individual projects (writing, producing and performing).

However, the group’s love of live performance drew INXS back to the stage and the invitation to officially open Sydney’s Olympic Stadium in June 1999 was the catalyst. Rather than replace Michael, the idea of performing with various guest vocalists was more appealing, and Terence Trent D’Arby took the role for the Olympic Stadium concert.

“It’s no secret that we have always loved playing live. That’s what we did for 23 years and we definitely missed being on stage,” Tim said.

Then in May 2000, the group’s close friend Jon Stevens–the former frontman with one of Australia’s most popular bands, Noiseworks–took on guest vocals for INXS’ first full concert since October 1997. The feedback from both critics and fans was extraordinary and over the past year Stevens teamed with INXS for several major concert events, including a 13-date tour of Northern Australia. The success of that trek along with shows in Vienna fueled the desire for further touring, and in August, INXS returned to Europe for five additional shows.

Band member Andrew Farriss said: “No-one will ever replace Michael as the lead singer of INXS. At the same time, we all still have a passion to perform and to continue doing what we love. In the past year we’ve played some shows with Jon, who is a fantastic singer. It has felt very comfortable, and sounded pretty damn good, so it seems a natural progression to perform together for this U.S. tour.”

New York's Westbeth Theatre Center in Greenwich Village will close down on March 30 after comedian Bill Bailey's performance. The 18,000-square-foot space is being put on the market by the landlord for hopeful market value. Westbeth is a nonprofit organization. The theater, which has been at the location for the past 24 years, has been fighting eviction for the past two years. The New School's Actors Studio is reportedly interested in the space. Arnold Engelman, the producing director, plans to keep the staff together and produce shows at other venues from its new West 17th Street office.