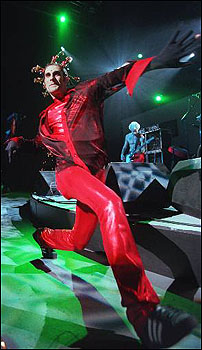 After a dormant five years, Lollapalooza's touring caravan of music, food, wares and more, is ready to relaunch this summer. Confirmed acts on the festival's resurgence are Perry Farrell, a re-formed Jane's Addiction, Audioslave, Incubus, Queens of the Stone Age and Jurassic 5.

At a press conference in Los Angeles today, second stage acts nor a complete itinerary were announced except for the confirmation of the following 28 cities:

LOS ANGELES (AP) — It's only rock 'n roll — with a message — as veteran rockers the Rolling Stones turned a free concert into an effort to raise awareness about global warming.

"You know something, we're all here … for a very good cause, and you should all feel good about yourselves," lead singer Mick Jagger said on stage at the Staples Center on Thursday.

The concert took place in an area that's one of the nation's smoggiest, despite strict statewide standards for motor vehicle emissions. The event was organized by the Natural Resources Defense Council, a nonprofit activist group.

Former President Clinton introduced the Stones with a speech about the dangers of global warming, telling the audience it is up to average citizens to "stop the planet from burning up."

"The reason this concert is important is that the old energy economy that's cheating us as a planet is very well organized, highly centralized, rich as can be and very well politically connected," Clinton said. "And the new energy future is decentralized, entrepreneurial and needs people like you to say, `Give me a clean car, give me solar shingles to put on my roof … Give me a clean future.'"

In introducing the band, Clinton invoked one of the group's biggest hits: "Even though the Stones once said `It's only rock 'n' roll' — tonight it's way more than rock 'n' roll," he said.

The band then opened the show with "Start Me Up," followed by "Street Fighting Man" and "You Got Me Rocking." The night was filled with a repertoire of past hits, including "Jumpin' Jack Flash" and "(I Can't Get No) Satisfaction," in which they lament women, consumerism and the world at large.

About 12,000 fans won tickets through an Internet drawing last month, while others received passes through nationwide radio station giveaways.

Among the Internet winners were Ken Fraser, 56, and his wife, Jane, 55, of Lake Forest, who said they were both Rolling Stones fans and supporters of the evening's environmental message.

"As we get older, we get more sympathetic toward the cause," Jane Fraser said. "I hope there's still a planet left for our grandchildren."

At an NRDC news conference Thursday morning, DiCaprio urged the public to "adopt an environmental lifestyle," including buying hybrid gas-electric cars like one the "Titanic" star said he drives.

Concert expenses were paid by real-estate heir and entertainment producer Steve Bing, according to organizers.

The Rolling Stones are currently completing the North American stretch of their Licks World Tour, and will launch the international leg later this month in Australia.

The show comes 34 years after the Stones performed another free concert at the Altamont Speedway in Livermore, Calif. Fighting broke out and four people died.

Eminem Planning Only One U.S. Show in '03

DETROIT (AP) — Superstar rapper Eminem plans only one U.S. concert this year and it will be in his hometown of Detroit.

Also appearing at the July 12 show at the new downtown football stadium will be Missy Elliott and 50 Cent.

"His entire North American tour takes place at Ford Field," Rick Franks of Clear Channel Entertainment told the Detroit Free Press. "We look at it as the highlight of the summer."

Metallica also plans to play in July at Ford Field, which hosted the Rolling Stones in October and holds about 45,000 people for concerts.

Yet few people inside or outside New Jersey are making better music or rocking out more these days than local boys Bon Jovi. The only 80s hair band to not only survive but thrive in the new millennium, Bon Jovi showed a continuing maturity and veteran stage presence as they brought their "Bounce" tour to Continental Airlines Arena on Monday.

The show, the second stop on the tour, opened with three huge satellite dishes rotating onstage as the band — lead singer Jon Bon Jovi, guitarist Richie Sambora, keyboardist David Bryan, drummer Tico Torres and bassist Hugh McDonald, rose from beneath the floor on a hydraulic platform, bathed in flashing blue, red and purple lights. The spotlight then grabbed Sambora, clad in a floor-length red Sgt. Pepper jacket as he ripped into the opening chords of "Bounce," with 18,000 fans roaring in response.

Jon Bon Jovi, clad in tight-fitting black leather pants and shirt, did his own one-legged bounce during the shout-it-out chorus, his famous mop of hair flopping up and down to the beat. The satellite dishes rotated downward and became three circular video screens where huge images of the band were shown.

Then it was on to "You Give Love A Bad Name," with Jon and Richie stalking the front of the stage during the famous guitar riff just like they did in the memorable 1986 video. Jon slapped hands, high-fived fans and got generally pawed by adoring females on the side of the stage during "Livin' On A Prayer."

"Undivided," the ode to 9/11 and the best track on "Bounce," began mournfully with Bryan playing a funereal dirge on the synthesizer before the band tore into the aggressive, defiant tribute to America coming together after the terrorist attacks. Jon Bon Jovi lives in Middletown, N.J., which lost 37 residents in the World Trade Center attack. He flashed visible anger as he snarled out the lyrics, "That was our mothers, those were our children, that was our fathers, that was each of us."

Later, he assumed his familiar role as romantic crooner on "My Funny Valentine," eyes shut tight, cooing in his lowest register as the girls shrieked like they used to for Sinatra in a different era.

The band was tight and energetic throughout the 24-song show, which lasted more than 2 1/2 hours, and was anchored by Torres' no-frills drumming and McDonald's booming bass lines. Sambora took over lead vocals from Jon on "I'll Be There For You," and Bryan ably filled in on the high harmonies, breathing new life into an old chestnut from the 1989 "New Jersey" tour.

Faith Hill to Perform for Soldiers

FAYETTEVILLE, N.C. (AP) — Soldiers at Fort Bragg will be treated to some faith, Faith Hill that is.

The country star will perform for soldiers next week at a free concert.

Hill's show at Fort Bragg, home to the 82nd Airborne Division and the Army Special Operations Command, will be broadcast by ABC's "Good Morning America" on Thursday morning.

The concert, in a stadium that holds about 8,000 people, will be open to fans showing military identification.

Hill has sold 25 million records and has had 10 No. 1 singles, including "This Kiss" and "Breathe."

DAYTONA BEACH, Fla. (AP) — Sheryl Crow and Kenny Chesney are among the singers who will headline the Dale Earnhardt Tribute Concert, a charity event Earnhardt's widow, Teresa, is organizing.

The concert is set for June 28 at Daytona International Speedway and will be the first non-racing event to take place there.

Proceeds will benefit the Dale Earnhardt Legacy Program, a charity that will donate money to children's, wildlife and educational programs, "supporting causes Dale championed in his lifetime," Teresa Earnhardt said.

Brooks & Dunn and Alabama also are scheduled to perform.

Tickets go on sale March 22. Premium subscribers to the Dale Earnhardt Inc. Web site, which is being launched next week, will be able to buy tickets beginning on March 3 — 03-03-03.