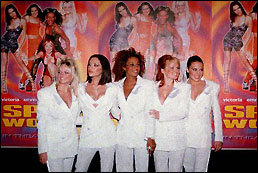 The Spice Girls might reform and tour according to reports out of England. Mel B. and Mel C. reportedly met to talk about getting the girl-power act back together. The Sun reports that Melanie ''Scary Spice'' Brown is trying to reunite the quintet for a worldwide stadium tour. Mel B. has reportedly approached Geri ''Ginger Spice'' Halliwell, who bolted from the group in 1998 at the height of its career, to join in the planned worldwide reunion tour.

Brown traveled to the states recently for a meeting with Melanie ''Sporty Spice'' Chisholm, the Sun reports. Insiders speculate that Mel B. needs the money, having recently sold her house and split with husband Jimmy Gulzar.

Brown, Emma ''Baby Spice'' Bunton and Victoria ''Posh Spice'' Beckham, are currently without record contracts. Mel C., who along with Halliwell, has enjoyed the greatest solo success of the five, is currently at work on a second solo album, while Halliwell is the host of a new TV series, ''Popstars: The Rivals.''

resides in downtown New York, and although he has performed in and around town this spring and summer, he is now undertaking what may be included in the Guinness Book of Records. He is playing all five boroughs of New York. Although this feat might have been done by some artists, none have ever been by a platinum-selling artist.

“The last time I came through the Northeast it was on the Area 2 Tour,” said Bowie. ”We played in amphitheaters which are usually a good distance from the major cities. Marathon courses are strategically planned to bring the runners to the streets. I would like to repay the fans that traveled so far to see me by bringing my show to them. But most importantly, I could get home from all the gigs on roller skates.”

With venues ranging in size from 300 to 2,900, the tickets are $75, except in Queens where they are $45. Clear Channel Entertainment is the promoter.

These shows will come directly on the heels of Bowie's in-progress overseas trip, which includes an October 2 performance at London’s Carling Apollo (formerly the Hammersmith Odeon), site of his final Ziggy and the Stardust concert in 1973.

first tour in nearly 10 years has been pushed back a week due to the technical aspects of the staging, according to promoter Clear Channel. Previously set to launch November 5 in Atlanta, the Growing UP Live tour will now begin on November 13 Chicago at the United Center. Tickets for the previously scheduled Cleveland and Washington shows will be honored at the new shows. Additional dates are TBA.

Updated tour dates are as follows:

Poundstone says she can't hide from her arrest last year on child abuse charges as she tries to resume her standup comedy career.

"I am not a victim," Poundstone told Newsday before an appearance Friday night at a small club on Long Island, part of a three-day swing through the Northeast this weekend. "I am absolutely responsible for what has happened in my life, and it is safe to say there has been some unfairness."

Poundstone lost custody of her three adopted children after pleading no contest last year to a felony count of child endangerment and a misdemeanor charge of infliction of injury on a child. The endangerment charge involved driving while drunk with children in her car.

The children were placed with a court-approved foster parent, a friend of the comedian's. Poundstone, 42, sees the children daily but the visits are monitored.

"I am back working — not as much as I would like to, probably for a variety of reasons, not the least of which is the economy," said Poundstone, who won the 1989 American Comedy Award for best female comedy club standup comic.

"God knows I do want to get past all this," she told the newspaper in a telephone interview as she participated in one of her court-ordered Alcoholics Anonymous meetings.

"But the performing part has been great. It's really fun to go out and laugh for a night."

Stuart is making spring plans for himself and his new band.

The country singer says he's played everything from cornfields to the Rock and Roll Hall of Fame. His new band, The Fabulous Superlatives, will travel with him in 2003 on his first tour in years, to support a new studio album due out this winter on his new label, Sony Records.

Stuart's last record was 1999's "The Pilgrim," which received critical praise but not much commercial success. Stuart left MCA Records shortly after its release.

Stuart tells Nashville newspaper The Tennessean he meant to take a year off after "The Pilgrim," but his planned fishing trips never materialized. Instead, he composed film scores in Hollywood for "All the Pretty Horses," wrote songs with his wife Connie Smith, and produced the new Johnny Cash tribute album, "Kindred Spirits."

original Blasters, who were one of the defining sounds of L.A.'s music scene in the early 1980s and helped keep American roots music alive during what was otherwise the genre's dark age, have reformed. They last performed together in 1985. The original Blasters–guitarist/vocalist Dave Alvin, guitarist/vocalist Phil Alvin, bassist John Bazz, drummer Bill Bateman and keyboardist Gene Taylor, who joined the group in 1981 two years after its formation–will reunite for a fall and winter tour in support of their latest Hightone Records live CD "Trouble Bound" to be released October 15.

More dates to be booked.

Cher's Miami Concerts To Be Taped For NBC TV Special

on her farewell concert tour, will have her November 6 and 7 shows at Miami's American Airlines Center broadcast as a two-hour TV special on NBC early next year.

"Cher's audience transcends the generations, and we look forward to re-visiting her many career highlights in so many entertainment arenas," says Jeff Gaspin, NBC's executive vice president for alternative series.

Titled "Living Proof," after the name of both the tour and her most recent album, the TV special will also feature highlights from her career.

bassist Jason Newsted has officially joined Voivod. Jasonic (Newsted's new given moniker) is also producing the group's upcoming release, "The Multiverse," on the Chophouse Records label (in association with Surfdog Records). Other band members are: Snake (aka Denis Belanger) on vocals, Piggy (aka Denis D'Amour) on guitar and Away (aka Michel Langevin) on drums.

Long-time friends and pioneers of metal music, the four musicians first began working together at Newsted's Chophouse studio in 1995, intent on keeping the music alive between busy touring schedules. However, with his departure from Metallica in January 2001, Newsted was free to work on other projects, which could now be more than just hobbies.

"Those who know Voivod respect Voivod around the globe," says Newsted. "This is the new beginning for all of us. We're the same age, raised on the same music. We've been through a lot of similar situations. All 4 of us are having such a good time writing our metal music together, in one room – bashing it out, it's real again!!"

The band plans to tour extensively in North America and Europe, following the album's spring 2003 release.