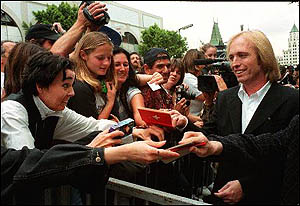 "Tom Petty Is Pissed" is the title of a feature in the newly revamped Rolling Stone magazine where shorter pieces and catchy titled articles compete better with the British rags. And Petty has got plenty of good reasons to be pissed–10 in all.

Out of the ten issues, that disturb Petty the most, there is one that might interest CelebrityAccess readers more then all of the others: Only a complete greedhead would charge $150 for a concert ticket.

"My top price is about sixty-five dollars," says Petty, "and I turn a very healthy profit on that; I make millions on the road. I see no reason to bring the price up, even though I have heard many an anxious promoter say, 'We could charge 150 bucks for this.' I would like to do this again and maybe come through and not leave a bad taste in people's mouths. I was at one of our gigs recently, and I was just stunned driving in that it cost thirty dollars to park your car. It's so wrong to say, 'OK, we've got them on the ticket and we've got them on the beer and we've got on everything else, let's get them on the damn parking.' You got to care about the person you're dealing with."

Other topics include radio, television, greed, cost of a CD and records labels do not care about artists.

does not plan to play at festivals in the future.

We'll never play another festival again," says Pearl Jam leader Eddie Vedder. Playing Roskilde in 2000, where nine fans were trampled to death, "was a decision based on making a little bit of money, and that's something we have to live with."

On Pearl Jam's new album "Riot Act," the song "Love Boat Captain" is a tribute to those who perished at the concert:

"Lost nine friends we'll never know/two years ago today/and if our lives become too long/would it add to our regret?"

in the final stages of planning their 2003 tour, are enlisting the opinions of their fans on whether they should play arenas or amphitheaters.

"We'd really love to know what our fans prefer and we are looking forward to announcing the tour soon! Thanks for all your support!"

plans on going out on tour early next year to promote her latest Mercury album "Up." It's the first new music from the Canadian superstar in five years.

Twain, who took some time out for the birth of her son, wrote all 19 songs on the album.

She said she's planning on going back out on the road.

"The tour I'm sure will start next year at some point. I really don't know when," Twain said. "It's hard to say. There is a lot to do between now and then. But that is what I'm hoping for. I'm really looking forward to it. I really look forward to getting on tour again. I enjoy it, being up on stage, singing my songs, and doing my thing."

Twain said she enjoys being on stage.

"For me, being on stage in concert is like being at a party with a bunch of friends. It's the way I see it," she said. I'm really a bar singer that ended up on a concert stage, to be honest with you. I mean, I started off in bars from a very young age, when I was eight years old, and that's what it feels like."

The double CD was recorded in different versions for different audiences. The US edition is color coded, with the green CD containing the country version and the red CD featuring the pop version.