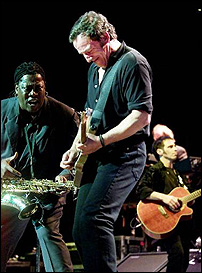 Bruce Springsteen and the E Street Band 's 2002-2003 The Rising Tour will play 46
shows in 46 cities this year (39 in North America; seven in Europe), and continue in
2003 with dates in Australia and Europe. It will finish up next summer in the United
States, where the band will do multiple shows in major cities

The complete schedule for the 2002 dates of Bruce Springsteen and the E Street
Band's tour is:

August 20 Portland, OR The Rose Garden


The Doors Reunite After 30 Years

The surviving members of The Doors – Ray Manzarek, Robby Krieger and John
Densmore – will perform their first concert since disbanding in 1973, on
September 6 at the California Motor Speedway. The Cult's Ian Astbury will join
them on vocals. Other special guest vocalists and musicians
yet to be announced. The Doors last played together, with the exception of their
1993 Rock & Roll Hall of Fame Induction, on September 2, 1972.
A US and European tour is planned for next spring.

Motorcycle maker Harley-Davidson is celebrating its 100th anniversary with a string
of concerts, including a reunion of the surviving members of the Doors. The tour
also includes motorcycles owned by the rich and famous such as Elvis Presley and
Jon Bon Jovi; a multimedia exhibit on the history of the Harley, motorcycle drill teams
and stunt riders and more.

The Essence Festival got another boost Thursday — a national TV audience. ABC broadcast festival performances by Alicia Keys, India.Arie and Luther Vandross as part of its Fourth of July TV special.

The first two Ozzfest 2002 concerts have been canceled due to Sharon Osbourne, Ozzy Osbourne's wife/manager, having treatable cancer surgery on July 3. Osbourne's press agent would not divulge what kind of cancer surgery was performed or where the operation took place. Ozzy and their three children were at her side.

The canceled concerts were July 6 in Bristow, VA and July 7 in Pittsburgh, PA. These shows are expected to be rescheduled. The tour is scheduled to start now on July 10 in Scranton, PA at the Coors Light Theatre at Montage Mountain.

Grateful Dead Members Issue Advisory To Its Legion Of Fans

With a new site confirmed for their Terrapin Station concert after two sites refused to stage the show, members of the Grateful Dead are being cautious, and issued the following statement to their fans:

See, faith helps. We're delighted to confirm that the local authorities have
given us a permit to put on Terrapin Station as planned at Alpine Valley on
August 3 and 4. We're looking forward to it.

We'll have more to say soon, but we'll start with this: Because of recent
events, we will all be under more scrutiny than ever, and it's absolutely
essential that we pull off two very cool days. If you don't have a ticket,
don't come. If people come without tickets, our ability to book future
concerts will be totally compromised. We've got all kinds of ideas for
making this easy, but it's too soon to go into details.

If you don't have a ticket, don't come. We thank you for your love and
patience.

Camp Bisco III: Senor Boombox hosted by The Disco Biscuits, will now take place as scheduled, August 23-25 at Salansky Farms in Union Dale, PA, and that Summer of Love … 35 Years Later, featuring two nights of Dark Star Orchestra, will be staged as scheduled, August 31-September 2 at Marvin's Mountaintop in Masontown, WV. Marvin's Mountaintop, just outside of Morgantown, is the same site that quickly absorbed Walther Productions' other uprooted Wilmer's Park event, the moe. or les festival and campout, from being jeopardized by officials' sudden interpretation of zoning regulations. As previously mentioned the moe. or les festival and campout, highlighted by two nights of jam band allies moe. and Les Claypool's Frog Brigade, is now being held July 12-13 at the serene and secluded 675-acre mountaintop setting.

Walther said he sees the move to Salansky Farms as another blessing in disguise prompted by the issues surrounding Wilmer's Park. Salansky Farms is as an ideal locale for Camp Bisco III, because it's situated within 150 miles of New York City and Philadelphia, historically The Disco Biscuits' two strongest markets. Salansky Farms is centrally located in a beautiful remote environment in the Poconos, in close proximity to Binghamton, NY, and Scranton, PA. It's also the site this summer of the Endless Mountains Music Festival (July 19-21) featuring the likes of Israel Vibrations, Billy Martin's Socket, Keller Williams and Deep Banana Blackout and produced by Steve Salansky. The Salanskys' festivals have taken place there for each of the past three years with little or no resistance from the community.

"It's off the beaten path and just minutes from I-81, and it has plenty of space for Camp Bisco III," says Walther. "The rolling, grassy hills offer natural amphitheatre-type surroundings, which are ideal for sound quality. And the panoramic view of mountains will greatly enhance the Camp Bisco experience."


ALBANY, NY (AP) — Bo Diddley has canceled a performance this weekend due to chest pains, according to his agent.

Diddley, 73, was to undergo several tests, Margo Lewis, his agent, said Tuesday. Diddley's doctor ordered him not to perform until the tests were complete and a diagnosis and treatment were determined.