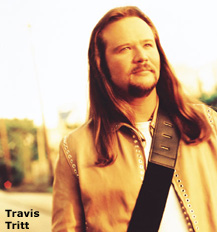 Travis Tritt has been chosen as the recipient of the 2001 VFW Hall of Fame Award. He received the honor Aug. 22 during the Veterans' 102nd National Convention in Milwaukee, Wis. The award is presented annually to individuals for distinguished service to the nation, the veterans and its armed forces through outstanding contributions in the field of entertainment.

Tritt was the spokesperson for the Disabled American Veterans during 1994-1996 and has visited many VA hospitals.