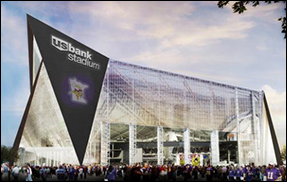 MINNEAPOLIS, Minn. (CelebrityAccess) — The Minnesota Vikings have landed a new naming rights partnership with U.S. Bank for their under-construction stadium which is set to open in the fall of 2016. The stadium will be named U.S. Bank Stadium.

Financial terms of the agreement were not disclosed, but Sports Business Journal reported that the deal is worth $220 million over 25 years, an average of $8.8 million. If accurate, the figure would be the fourth largest naming rights deal in NFL history, behind New Jersey's Metlife Stadium, San Francisco's Levi's Stadium and Houston's Reliant Stadium.

The $1.18 billion indoor stadium is more and is on schedule to be open in time for the 2016 NFL season. Located on site of the former Metrodome in Minneapolis, the stadium has already been slated to host the 2018 Super Bowl.

“On behalf of the entire Minnesota Vikings organization, we would like to thank Richard and the 67,000 U.S. Bank employees for their belief in, and support of, the Vikings and this new stadium and for the commitment they make in the economic and social well-being of Minnesota and its citizens every day,” said Vikings Owner/President Mark Wilf. “We are proud to partner with a storied and respected Minnesota institution to introduce both U.S. Bank Stadium and the Places to Play program, both of which will serve as assets for the entire Minnesota community.” – Staff Writers