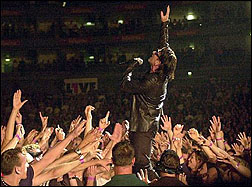 (CelebrityAccess MediaWire) —
Fearing that its missing unfinished album Vertigo might be pirated on the Internet, U2 is gearing up contingency plans by possibly releasing it as a legal download on iTunes if necessary. Vertigo is due for release by Interscope in November.

"If it is on the Internet this week," Bono told London's Daily Telegraph, "we will release it immediately as a legal download on iTunes and get hard copies into the shops by the end of the month. It would be a real pity. It would screw up years of work and months of planning, not to mention fucking up our holidays. But once it's out, it's out."

"A large slice of two years work lifted via a piece of round plastic," the Edge said on the band's website "It doesn't seem credible, but that's what's just happened to us…and it was my CD." The CD went missing during a photo-shoot in the south of France. The band recently completed much of the recording of the highly anticipated new album in Dublin and had been involved in post-production work in France.

"The recording of this album has been going so well," added Paul McGuinness of Principle Management. "The band is so excited about its release. It would be a shame if unfinished work fell into the wrong hands."

"This matter is of great concern to us," said Lucian Grainge, Chairman and CEO of Universal Music Group UK. "As the missing CD is our property, we're very keen on finding it as soon as possible, and the French Police are being extremely helpful in this regard." –Bob Grossweiner and Jane Cohen