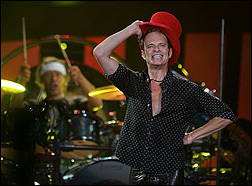 CHARLOTTE, NC (CelebrityAccess MediaWire) — The Van Halen tour kicked off on Saturday in Charlotte, and judging by the strong reviews thus far, it may be one of the hit tours this year.

Some of us may feel like we woke up in the 1980s this year, with a number of familiar bands gathering the troops for another tour; The Police, Genesis, The Cure and the latest addition to the growing throng, Van Halen. The boys kicked their tour off last Saturday in at Bobcats Arena in Charlotte, North Carolina before heading up the east coast.

Brian Hicks, the music critic for the Post & Courier described the newly reformed Van Halen with Roth at the mic as "all business" as they rocked the sellout crowd. He went on to note that while the band didn't seem as casual on stage as they were in days of yore, engaging in little banter, their performance was tight and professional.

Young Wolfgang Van Halen, Eddie's son who's handling bass duties for the band also got a nod for his apparent proficiency.

According to Hicks, the setlist cleaved to the band's earlier materials, not playing anything newer than 1984, a year many Van Halen fans consider to be their high water mark.

The tour is on track through the rest of the fall before winding down on December 30th in Las Vegas. – CelebrityAccess Staff Writers