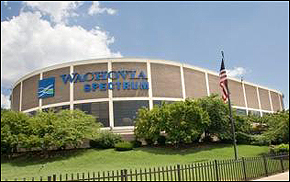 PHILADELPHIA (CelebrityAccess MediaWire) — The final year at the 42-year-old Wachovia Spectrum is winding down but the commemorative year of "Remember the Spectrum" events still has a few surprises in store for fans.

A number of these gigs have yet to happen and Philadelphians can look forward to Alan Jackson, The Cheetah Girls and Tina Turner and the Rock Band Live Tour featuring Panic at the Disco, Dashboard Confessional, Plain White T's and The Cab.

Electric Factory Concerts (and now Live Nation promoter) Larry Magid will join Live Nation booker Geoff Gordon Comcast-Spectacor prexy Peter Luukko in a news conference on Tuesday where they will look back at the past year's events and tease us with some upcoming surprises. One of them may well be the addition of both Neil Young and Wilco on December 12th to the Wachovia's calendar.

"With this season being the final season of the Wachovia Spectrum, we will celebrate the history of the Spectrum with an exciting, year-long, celebration of events," Comcast-Spectacor president Peter Luukko said.

Those interested can keep up with events at the doomed Wachovia Spectrum by checking out their website here. – CelebrityAccess Staff Writers