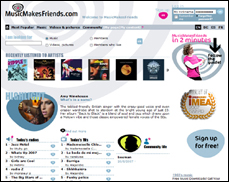 EU WEB (Hypebot) – Warner Music International and the popular European online music community, MusicMakesFriends announced a content and revenue partnership. Warner Music’s catalog of will be available on MusicMakesFriends’ streaming platform in France, Germany, UK, Spain, Belgium, Ireland, Austria, Luxembourg and Switzerland. Under the terms of the deal, both companies will share in revenues generated by ads and subscriptions services.

MusicMakesFriends is a music community created by music fans in their own language (English, French, German and Spanish). The ad-supported streaming service allows members to stream and share full track playlists free. In addition, MusicMakesFriends operates a Premium subscription service in nine EU countries, which gives members unlimited access to entire catalogs plus many other features for £7 (or 8.99 EUS) per month without any long term commitment. Under the agreement, in addition to the revenue generated by the use of their music Warner Music artists will also receive promo across the site.