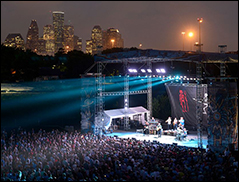 HOUSTON, TX (CelebrityAccess) — Just a few short months after opening its doors, the White Oak Music Hall has been hit with a temporary injunction blocking outdoor concerts that feature amplified sound at the venue until next month.

The injunction stemmed from a lawsuit brought against the venue by its neighbors, who complain that loud music from the outdoor stage has hurt their quality-of-life.

The temporary restraining order is in effect until December 30th, and residents are seeking to have the order extended to Jan. 12th. As well, local residents are urging the city's mayor to pull permits for the venue, the Houston Chronicle reported.

The venue, which opened last summer, bills itself as a multi-stage, indoor/outdoor concert venue. Booked by Pegstar Concerts, the White Oak hosts concerts by both local acts and nationally touring artists. – Staff Writers