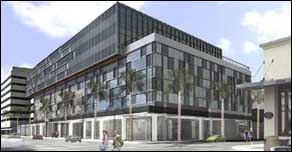 BEVERLY HILLS (CelebrityAccess MediaWire) — The William Morris Agency in Beverly Hills is moving to a different office..once it's built.

The new facility will still be in Beverly Hills, reportedly near Wilshire Blvd, unlike ICM and CAA who are abandoning their Beverly Hills digs for Century City.

Presently, the motion picture and television agents are located across the street from the music division, the new building will allow the entire operation to be concentrated in one place.

"The idea of being in different buildings has always been a complicated situation," Wiatt told the L.A .Times "We have all this technology to stay connected, but we felt an urgent need to be in one building."

Variety reports that WMA will not own the building, but will instead lease it from New York-based property management group George Comfort & Sons. They will however, retain ownership of their current properties, which they will lease as office space.

Construction for the new 210,000 square-foot office building is expected to be completed by 2008. The facility will come equipped with a screening room built to accommodate up to 200 people and several levels of underground parking.

"We think it's a good statement first and foremost for the people who work here, and certainly our clients, and also as good corporate citizens," CEO Jim Wiatt told the Times. Wiatt might have had some additional personal motivations. His wife Elizabeth is an environmental activist, known for her work on the board of the National Resource Defense Council in addition to other advocacy groups. – CelebrityAccess Staff Writers