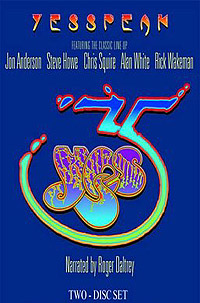 (CelebrityAccess News Service) – Yesspeak, the new Yes documentary, will premiere on the big screen January 26 at 9:00 PM EST (6:00 PM PST) in exclusive screenings at select Regal Entertainment Group theatres across the country. The One Night Only big screen premiere presented in REG theaters will be followed by an exclusive, live acoustic performance from the band simulcast to participating theatres. The special in-theatre documentary presentation and concert event is being held on the eve of the January 27 release of the Yesspeak DVD (Classic Pictures).

Immediately following the Yesspeak screening, Yes will perform a 40-minute acoustic set live from Los Angeles, which will be distributed via satellite to participating theatres using Regal's Digital Content NetworkSM system. The exclusive acoustic set will feature some of the newly recorded material the band performed for the 35th Anniversary Ultimate Yes Collection, as well as other classic Yes songs.

Yesspeak features vocalist Jon Anderson, guitarist Steve Howe, keyboardist Rick Wakeman, bass guitarist Chris Squire and drummer Alan White on their Full Circle Tour of Europe. As it follows life on the road, Yesspeak reveals an up-close and personal look at the members of the band and the music they perform.

Yes will also perform in April-May in the US, including markets where the special screenings are taking place as part of the band's ongoing 35th anniversary celebration. –Bob Grossweiner and Jane Cohen