MANCHESTER, Tenn. (CelebrityAccess) Bonnaroo is expected to have a “Superjam” called “Into The Great Wide Open – A Superjam Celebrating The Music Of Tom Petty & The Heartbreakers,” to take place during the June 7-10 event at The Farm in Manchester, Tenn. 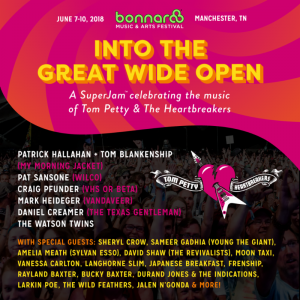 The Superjam has become an integral part of festival, and this one promises to have tributes to the late Tom Petty by acts like Sheryl Crow, Sameer Gadhia of Young The Giant, Amelia Meath of Sylvan Esso, Moon Taxi and Vanessa Carlton. The house band is expected to be directed by My Morning Jacket’s Patrick Hallahan and Craig Pfunder of VHS or Beta.

Tom Petty & The Heartbreakers were headliners at Bonnaroo in 2006 and 2013.