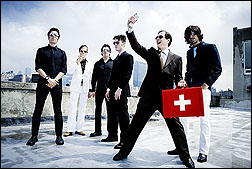 ESTONIA (CelebrityAccess MediaWire) — Batlic music fans were faced with some tough choices last month when they were presented with a pair of festivals, both held on the same weekend at this year's Rabarock festival and the Airport Jam festivals on June 15 & 16th.

The festival has become an annual event in Jarvakandi, Estonia. This year saw the expansion of the festival to two days.

At the same time, a party of a different sort was taking place at the Haapsalu airport. Air Jam, featuring electronic and dance oriented music featured 12 international and 40 local DJs. The festival had two stages, one main stage and one for drum n' bass as well as a "chill-out" area. Featured performers included Richard Durand, Tony Cha Cha a.k.a E-Craig DJ Choose & Jesselyn.