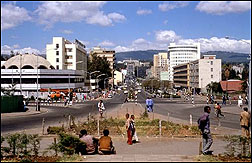 Construction started, with a 90,000 square meter lot being prepped for the new structure. The concert hall is expected to be able to accommodate 20,000 patrons, claimed Agnet Meskel, coordinator of the project for Sheikh Mohammed Ali Al-Amoudi.

The new concert hall is being constructed as part of the Millennium celebration which is in the planning phases. The celebration will reportedly feature performances by prominent international hip hop/pop artists. According to Fortune magazine, negotiations with Janet Jackson and 50 Cent are underway.

The hall is expected to be completed by the end of July 2007 and then be demolished in six months to make way for a hotel and convention center.

Ethiopia's belated celebration of the Millennium comes this year on September 16th, due to their usage of an ancient variation of the Julian calendar, a dating system largely abandoned in the west during the 16th century. They plan to mark the event with a national music festival, the planting of 56 million trees and other events. – CelebrityAccess Staff Writers