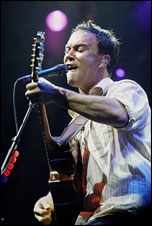 (CelebrityAccess MediaWire) — Volunteers registered a total of 14,656 voters at Dave Matthews Band concerts this summer, setting an all-time record for a single concert tour. Roughly half of the voters HeadCount registered were age 18 to 24, a population segment that typically has the lowest voter participation rate of any age group.

The voter registration efforts were led by a nonpartisan, not-for-profit organization called headcount.org, which was formed only in February of this year. With the help of a $15,000 contribution from Dave Matthews Band’s charitable foundation Bama Works, HeadCount sent volunteers on the road this summer to register voters at every single Dave Matthews Band concert.

The tour kicked off in St. Louis, MO on June 17 and finished up on September 12 at a free concert in San Francisco, and included 48 shows in all.

“The Dave Matthews Band tour let us to reach thousands of young voters, who otherwise might not have registered,” said Andy Bernstein, HeadCount’s co-chair. “Sometimes, you have to take the message and the opportunity right to the people, and being on the road with Dave Matthews Band allowed us to do that.”

Matthews is also is appearing in a public service announcement produced by HeadCount, currently airing on TNT, TBS among other television networks. The PSA can be viewed at headcount.org

Also present at nine Dave Matthews Band shows was Rock The Vote, which accounted for 2,053 of the nearly 15,000 total. –Bob Grosseweiner and Jane Cohen