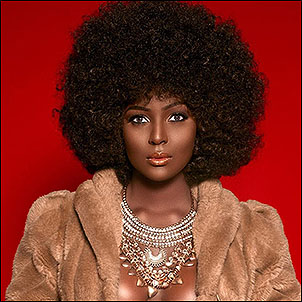 She’s a dark-skinned Latina repping hard for Afro hair’d girls and plump derrières all the while becoming increasingly popular in a Caribbean nation overflowing with racism. Meanwhile, back at home near Allapattah (or “Little DR”), la Negra is taking over the scene with her killer curves and in-your-face attitude.

Amara doesn't live the life of a normal 27-year-old. She doesn't go to the movies or hangs with the girls. As a kid, she watched her mom work to the bone to keep a roof over her head and put her through several art academies. While others her age were learning to ride bikes or enjoying family dinners on the weekend, Amara rigorously prepped for a future in entertainment.

So, who is this doe-eyed, shapely tank of woman who moans when she sings? With her new single “Asi” crackling through the wire, from Love & Hip Hop Miami's cast, the Dominican is fighting for Afro-Latinos, the Hispanic culture and creating change.

Marjua Estevez from Latina Magazine caught up with the celebrity back in 2015 and here's what she has to say which still hits home today.

What was it like growing up in your household?

I grew up with a single mother. My mom sacrificed a lot to give me a decent lifestyle. She worked up five jobs in order to maintain the household and still keep me in the music. I was in a dance academy; I used to dance Monday through Friday. I had acting classes, and I had singing classes. I also had modeling classes. I was doing it all. My childhood pretty much revolved around my future. In fact, I don’t know how to ride a bike or how to swim or even roller skate. I don’t know how to do anything that a normal kid did for fun while growing up.

Do you regret anything?

My fun was performing. I don’t regret anything. I do realize that I missed out on a childhood because I was so focused on my career. But at the same time, I am where I am today because of it. I still have ways to go, but I’ve made it further than a lot that have tried for years. I’m very focused and determined and that’s something that my mom definitely instilled in me. She would ask me “do you want to have fun or prepare for your future?” And as a result, I ended up raising myself a lot of the time. I don’t really have any friends.

My mom emigrated from the Dominican Republic to the United States. I have some family, but real family? I only have my mom. She is the only person that I really know. So everything I do, I do to make her proud.

Was there a defining moment for you that made you realize you wanted to pursue a career in music and acting?

Not really. When I was little, I never really talked about wanting to become an artist, I just spoke like I was already one. I’ve always had a clear vision. I earned my first trophy in 1991, [and] I was born in 1990. It was a beauty pageant, so I didn’t really know what was going on. But it was in my system. I’ve always loved to perform. I’ve always loved to sing. I’m a great entertainer, and it comes naturally to me. All my life, I’ve been pretty much sure this is what I want to do.

A lot of kids start off saying they want to pursue one thing and end up doing something entirely different. Which is cool. But for me, I’ve always been very clear. The only other thing I may have thought about was becoming an attorney, and that’s because I got a mouth on me and I’m really good at arguing [laughs]. Other than that, this has always been it for me. And everything that I am is thanks to my mother. If she hadn’t supported me in the way that she did, I wouldn’t have lasted as long as I have. She made sure to prepare me in every aspect that she could from singing to acting to dancing.

Who are your greatest musical influences?

I was very much influenced by Donna Summers, Toni Braxton, Tina Turner, Celia Cruz, La India and Olga Tañon. Those were women that I totally admired from the get-go. As an adult, Beyoncé inspires me. I admire her personality, her career and pretty much everything she’s all about.

I was born in the US, but my culture is Latin. So, in my household, we heard a little bit of everything — Juan Luis Guerra, Fefita — but strong women with big voices have always influenced me.

"As much as people want to say that racism is over and it doesn’t exist, it does, especially in the Latin market. When they talk about a Latina, they talk about Sofia Vergara or Jennifer Lopez, Shakira even. But not anyone who looks like me, and I’m 100 percent, Latina."-Amara La Nerga

As an Afro-Latina, what are some of the challenges that you’ve had to experience in the music industry, on and off stage?

Being an Afro-Latina in the Latin market is particularly difficult because you essentially have to work twice as hard to prove yourself. As much as people want to say that racism is over and it doesn’t exist, it does, especially in the Latin market. When they talk about a Latina, they talk about Sofia Vergara or Jennifer Lopez, Shakira even. But not anyone who looks like me, and I’m 100 percent, Latina.

I’ve been in novelas, but the roles that are carved out for us are more often than not stereotypical. You’re a slave, a drug addict, a gangster, or a murderer — that kind of roles. It’s tough to land a serious role. And anytime I say stuff like this, people are in shock. Like they can’t believe I just said racism is alive or something. Listen, I can only speak from my own personal experience.

One of the reasons I’m so rebellious and I wear my hair from my head attached to my body is because for many years I was told this bullshit lie that in order to be beautiful, I had to have straight hair because my hair was too “unmanageable.” Hello! I’m black. Yes, I’m going to have nappy and kinky hair. But that’s part of what makes me beautiful. And it took me years to know and realize that. I’m straightening and burning my hair for what? To please who? I was doing it to try and fit into society.

Right. And considering you are everything mainstream media refuses to promote as “beautiful,” from where does your confidence stem?

My mother. My mother always made sure that I believed, acknowledged and understood my beauty. I’m not cocky. I think that I’m beautiful because of who I am inside and out. I have an amazing personality. You should get to know me [laughs]. And two, my confidence also comes from myself. In this industry you get told “no” every single day, they will always find something wrong with you. And in order to survive in this, you got to be confident. I’m comfortable in my skin, I’m proud of who I am, I love me.

Do strangers ever make comments on your hair or what you’re wearing?

It’s come to the point where I don’t even acknowledge when people look at me. I’ve learned to block the negativity in order to preserve my self-confidence.

What is the single most important piece of advice you have to give to women of color around the world?

I don’t really like the term “women of color.” I’m not brown or caramel, you know? I’m black. That’s why I’m AMARA LA NEGRA. I’m very proud of that. I reinstate that every chance I get because obviously, they're very few of us in the Latin industry.

My advice: Be proud of who you are. Be proud of the skin you’re in. You’re one in a million. There’s no other you, and you got to embrace that shit and rock out. Don’t try to fit in. Don’t try to mimic what you see in the magazines, ‘cause all of that is photoshopped anyway. Everything you see from mainstream media is bologna. It’s conditioned us to believe all of us women should look a certain way – our bodies, our hair. It’s bologna. Stop admiring how stars appear on the covers; direct your attention to who they are as people. And most of all, if you want something, go get it. You only have one life. The only thing we’re guaranteed is death.

That’s real. What does it mean to be Dominican to you?

It means sabor, tamboras, music, and rhythm! It means humility and happiness. It means so many things to me. I’m very proud to be Latina, but even more to be Dominican. I was born in Miami and didn’t get to visit the island until I was 18. But that gave me the opportunity to really embrace and love my culture.

What legacy do you want to leave behind?