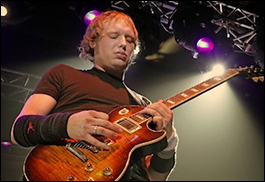 BAY MINETTE, Ala. (CelebrityAccess) — The family of late 3 Doors Down founder Matt Roberts has filed a wrongful death lawsuit against a physician and a pharmacy, claiming their negligence contributed to his death by overdose.

Roberts, who was the lead guitarist for the band, died of a drug overdose on Aug. 20, 2016, at a hotel in Wisconsin while performing at a benefit concert.

According to the Associated Press, the lawsuit filed on behalf of his family members names as defendants Dr. Richard Snellgrove, who the suit alleges continued to prescribe high doses of opioids and failed to provide adequate medical supervision to the 38-year-old Roberts after he had completed a drug rehab program.

“It’s unfortunate that Mr. Roberts passed away, but Mr. Roberts passed away because of his abuse of his prescriptions in addition to using other drugs that weren’t associated with his prescriptions,” attorney Dennis Knizley told the Biloxi Sun-Herald. Kinzley, who is defending Snellgrove in a separate federal criminal case stemming from the death, added. “It was definitely unfortunate, but it’s certainly not at the hands of Dr. Snellgrove.”

The suit is also targeting a Rite Aid Pharmacy in Spanish Fort, Alabama, where Roberts allegedly obtained the drugs that killed kim. The suit alleges that the pharmacy failed to properly report suspicious activity to the DEA and Alabama Board of Pharmacy.

Roberts, who was one of the founding members of 3 Doors Down, exited the band in 2012 and checked himself into a drug rehab center. While he never rejoined 3 Doors, he continued to play guitar.