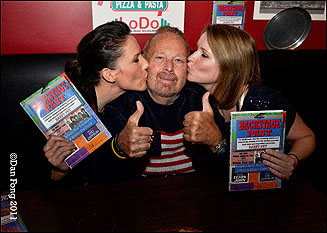 DENVER (CelebrityAccess MediaWire) — Storied indie promoter Barry Fey has released a memoir of his years as a promoter, revealing, according to Fey, stories culled from his extensive background in the live entertainment industry.

Featuring forwards by rock luminaries such as Pete Townshend and Ozzy & Sharon Osbourne, the book is full of "warts and all" anecdotes about backstage life, with memories of numerous influential figures in the entertainment world, from Mick Jagger, and Bruce Springsteen to Irving Azoff and Truman Capote.

Among the anecdotes that Fey includes are the time he claims he watched Doors frontman Jim Morrison inhale fumes from a vat of floor wax. In other stories, Fey describes the time when Mick Jagger and Keith Richards taught him how to snort cocaine and another recounts the time he was given a jar of blood for Ozzy Osbourne.

Fey, who had retired from concert promotion in 1997 after 30 years, returned to the industry earlier this year when he signed on as the music director at the Denver County Fair.

"He’s one of the best promoters worldwide and when combined with his naughty personality – he’s wickedly funny – it’s the perfect recipe," noted Sharon Osbourne. "He’s among a handful of very special people in my life," Ozzy added.

"If you want to hear about how rock shows were evolved, elevated and turned into magnificent spectacles, read and learn. He [Fey] may give away some secrets. If you’re really lucky he’ll include his simple, but incredible, recipe for hot shrimp. But I have a feeling that could be one rock ‘n roll secret you’ll have to try to get from me," wrote Pete Townshend. – CelebrityAccess Staff Writers