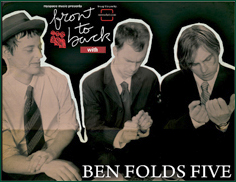 LOS ANGELES (CelebrityAccess MediaWire) – MySpace announced September, 3rd the launch of its newest music program, "Front to Back," celebrating iconic albums that have helped shape the ‘MySpace Generation.’ MySpace kicks off this program by reuniting beloved alt-pop band Ben Folds Five with an exclusive one-time live performance of their final studio album together, The Unauthorized Biography of Reinhold Messner, in its entirety. The concert will be the band's first performance together in nearly ten years and will take place in the band's former hometown of Chapel Hill, North Carolina on September 18, 2008 at the UNC Memorial Hall. The show will be rebroadcast on the "Front to Back" official MySpace profile in October http://myspace.com/fronttoback .

”We are honored and excited that Ben Folds Five is helping launch this new music program," said Josh Brooks, VP of Music Marketing for MySpace. "'Front to Back' is about connecting and re-connecting the MySpace community, fans and bands alike with some of the most acclaimed and inspirational albums ever produced."

"Front to Back" asks leading artists to perform one of their own seminal albums, from front to back, in a live concert that is then later aired on the site. The airing of the event includes interviews with the band as well as artists who were influenced by the album. Presented by Nowwhat.com, tickets to the Ben Folds Five "Front to Back" taping will go on sale to the public through etix.com on September 8th at 10 AM EST. Additional "Front to Back" performances will be announced by MySpace in the coming months.

"When MySpace approached me about doing this gig," Ben Folds said, "I misunderstood and thought they wanted us to play Purple Rain front to back, so of course I said yes. But we're happy to do The Unauthorized Biography of Reinhold Messner instead. Of our three albums, this one brings back the most vivid memories. It was actually written to be one song of many movements, which is why there are motifs that appear throughout the album. That should make Reinhold a natural to be played front to back."

The proceeds from concert will benefit Operation Smile: Changing Lives One Smile at a Time. For more information, please go to operationsmile.org. –by CelebrityAccess Staff Writers