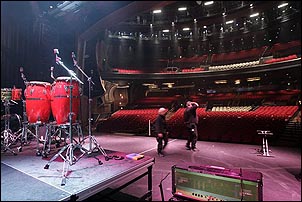 MONTVILLE, CT (CelebrityAccess MediaWire) — Scalpers hoping to make a quick buck off of flipping tickets Miley Cyrus tickets at the upcoming Foxwoods show may have to reconsider their plans.

Tickets to Miley's gigs are a hot commodity, first with fans but also with speculators and scalpers who snap up the tickets and then resell them on secondary ticket sites like StubHub, usually for prices that are much higher than the face value of the ticket. This has left a swirl of angry fans and legal actions in Miley's wake.

The folks at Foxwoods think that they may have found a solution to this problem. The pop star is set to appear at the brand new, 4,000 seat MGM Grand Theatre at Foxwoods Resort & Casino on September 27 and while tickets are sold out, you can't get them on StubHub.

"If you look on StubHub as of (Thursday) morning, you can see 200 to 300 tickets for sale for Miley's show in California, and none for our show," Bruce Flax, director of tickets for Foxwoods and MGM Grand told the New London Day.

Flax is hoping that the new system, dubbed Equal Tix, will deter ticket speculators. Equal Tix is integrated into Foxwoods own in-house ticketing system and requires prospective ticket-buyers to register online to get an access code that functions as a virtual place in line and allows the registree to purchase up to 4 tickets. Purchasers can then pick up the tickets at the box office on the day of the event, provided that they can present a valid photo ID and the credit card used to purchase the tickets.

While the system isn't perfect — scalpers could still sell tickets, they would just need to show up at the box office on the day of the show — at first blush, it seems to be working well.

"We must be doing something right, because scalpers are writing to newspapers trying to get articles written about how unfair it is. One paper posted a blog saying a publicist representing one of the bigger scalpers pitched a story placing (our new system) negatively." Flax noted. – CelebrityAccess Staff Writers