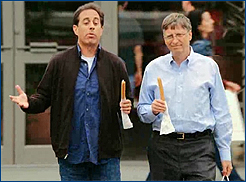 The ad was the start of a highly anticipated $300 million advertising campaign that Microsoft is launching in attempt to rebuff Apple's popular TV commercials, which have portrayed Microsoft and PCs as uncool.

In the commercial — which can be found at Microsoft.com and on video sharing sites — Seinfeld is walking through a mall when he spots Microsoft Chairman Bill Gates at a "Shoe Circus" store. The comedian than helps Gates pick out a new pair of shoes while the jokes come quick: showering with clothes on, Gates being a "10," platinum credit cards for a fictional shoe store.

It's a zany ad that packs a lot of quirkiness into 90 seconds. With no direct mention of Microsoft or its operating system, Vista, the commercial concludes with the slogan: "The future, delicious."

The ad was created by Crispin Porter & Bogusky — a firm with a reputation for oddness. Many technology and advertising blogs have turned to Seinfeld's trademark comedy description — "nothing" — to describe the ad.

"Huh?" wrote Abbey Klaassen for Ad Age. "You could be forgiven for not knowing what the heck Microsoft's new TV ad … was about."

Dan Frommer, writing for the Silicon Alley Insider, pronounced the ad "not funny" and added that the mall shoe store setting "is not going to help Microsoft look any cooler."

For the blog Techcrunch.com, Michael Arrington noted that the "tech and geek crowd is a little underwhelmed" by the ad, which he said is "a far cry from the brilliant Microsoft v. Mac ads."

Brad Brooks, vice president of Windows consumer product marketing, said in a video posted on the Windows press Web site, that the ad is a "teaser" meant to "engage customers in a conversation … to get the conversation going again about what Windows means in people's everyday lives."

Even if the reaction was mostly negative, Microsoft's ad has clearly succeeded in getting people talking.