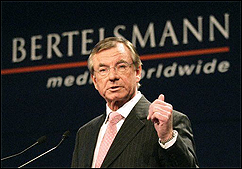 HAMBURG (CelebrityAccess MediaWire) — Bertelsmann Media Worldwide has announced that it will sell its BMG Music Publishing division to help prevent a minority shareholder from taking its shares public.

The German media giant released a statement saying that it would invite “selected bidders” to engage in an auction process in June, according to Billboard.

Proceeds from the sale will help Bertelsmann to buy-back the 25.1% shareholding owned by Belgian investor Albert Frere’s Groupe Bruxelles Lambert. The company has set a €4.5 billion ($5.7 billion) asking price. Bertelsmann CEO Gunter Thielen said he was prepared to purchase the GBL stake at a decent price in order to thwart a flotation of its shares on the stock market.

The company will finance the rest of its buy-back with effect from July 1 via a bridge loan provided by several unidentified banks. A rumored sale of Bertelsmann’s stake in the 50/50 joint-venture Sony BMG was not mentioned in the statement, according to the magazine.

“I am happy about the buyback,” said Liz Mohn, speaker of the majority shareholding Mohn family, in the statement. “It guarantees the independence of the company and its lasting and sustained development on the basis of our proven corporate culture. It secures the greatest possible freedom for the executive board to manage the business.”

Under CEO Nick Firth, BMG Publishing has built up a substantial catalog in recent years, aided by an acquisition of Zomba Music Publishing in 2002, adding an extensive pop and rock repertoire.

According to Thielen, BMG Publishing had its best-ever year in 2005, with revenues exceeding $478 million. –by CelebrityAccess Staff Writers