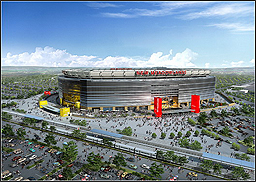 EAST RUTHERFORD, NJ (CelebrityAccess MediaWire) — In the face of strong demand, AEG has addead a 4th date to Bon Jovi's stand at the New Meadowlands Stadium in the band's home state of New Jersey, scheduled for Friday July 9th.

Joining Bon Jovi will be southern rock-rapper Kid Rock. The list of guest performers at the previously announced series of inaugural dates at the soon-to-be-opened venue include Train on Wednesday, May 26th; Gavin DeGraw on Thursday, May 27th; and OneRepublic on Saturday, May 29th.

Natives of New Jersey, Bon Jovi is set to hit the road in support of 'The Circle' their 11th studio album. The tour will see Bon Jovi playing more than 135 shows in 30 countries throughout much of the next two years. The last time Jon and the boys did a road trip with their "Lost Highways Tour" it turned out to be a monster, ranking #1 on Billboard's top grossing tours of 2008 list.- CelebrityAccess Staff Writers