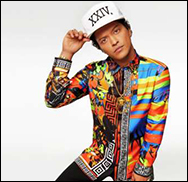 The tour will begin March 28 at Antwerp, Belgium`s Sportpalais and will travel throughout Europe through June with shows set in London, Paris, Madrid, Zurich, Copenhagen, Berlin and more.

Live Nation is promoting the tour and all the dates can be seen at brunomars.com.