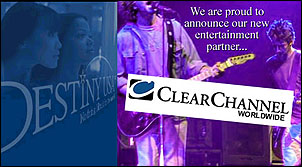 Clear Channel has inked a deal with Destiny USA to book, operate and promote the stadium-arena, theaters and museums at the still-to-be-built Carousel Center mall in Syracuse,
NY, reports the Post-Standard.

The Pyramid Companies, the mall's owner and Destiny USA's developer of the planned $2.2 billion entertainment and retail complex, still has to secure financing.

Venues covered in the management agreement include a 40,000-seat mixed-used stadium-arena called Starena, which plans to be used for a variety of sporting events,
including motorsports and rock concerts. The venue will have retractable roof and seating able to be configured to 7,500; a 2,500-seat ballroom and concert theater modeled after
Fillmore East and West; a 400-seat cabaret theater; and an exhibition hall and museum, which would bring in traveling museum exhibits like the Clear Channel-promoted Titantic artifacts tour; an indoor performing arts center aiming at extended-run productions such as Cirque du Soleil or "Sesame Street Live."

"This will take Syracuse and put it on the same circuit as Boston and New York City," said Joel Delmonico, who oversees the Central New York operations of Clear Channel.
"Syracuse moves from a tertiary market to a primary market."

Robert Congel, principal of Destiny USA and founding partner of Pyramid, said the agreement with Clear Channel "ensures that Destiny USA will play host to the biggest acts in the world of entertainment and theater."

As for when construction will start, Congel said they still have "a few hurdles to overcome before we proceed. We'll start as soon as possible."