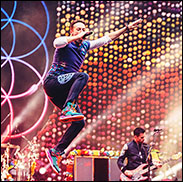 (CelebrityAccess) — Last night, British rock band Coldplay wrapped the final show of their "A Head Full Of Dreams Tour" in Buenos Aires, Argentina, and entered the record books with one of the top grossing tours in history.

According to figures published by tour producer Live Nation, Coldplay's "Head Full of Dreams" generated an impressive $523,033,675 and saw the band perform in front of 5,389,586 million fans over the course of the year-and-a-half run.

The tour, which kicked off in March, 2016, following the band's performance during the halftime show of Super Bowl 50, saw the band perform at 114 shows in 76 cities and 31 countries, with two legs in Latin America, two in Europe, two in North America, one in Australia, and one in Asia.

Other records set by the tour include an attendance high at Mexico's massive Foro Sol Stadium, where Coldplay performed on April 17, 2016, in front of an audience of 67,451, the culmination of a trio of shows at the stadium.

The tour also saw Coldplay close out the final night of the 2016 edition of Glastonbury, in a show that included a duet with Barry Gibb, the only surviving member of the Bee-Gees.

The tour was in support of 'A Head Full of Dreams' Coldplay's seventh studio album, which has moved an impressive six million copies since it was released in December 2015. A live album covering the tour will be released this month.