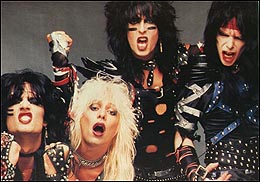 TAMPA (CelebrityAccess MediaWire) — An Illinois man has filed suit against Live Nation after he claims that he was beaten by a member of heavy metal band Motley Crue and security while at a November 22nd concert at Ford Amphitheater.

According to the Tampa Tribune, Gerald Schneeman of Rockford, IL contends that while standing in front of the stage at an Aerosmith/Motley Crue show, he was struck on the the head and knocked to the ground with a guitar by the member of the band who jumped off stage. He further asserts that security at the concert then arrived and assaulted Schneeman before dragging him outside.

He is claiming bodily injury, scarring and disfigurement, according to the suit, however details of his injuries were not listed.

Representatives from both Live Nation and the band were unavailable for comment. – CelebrityAccess Staff Writers