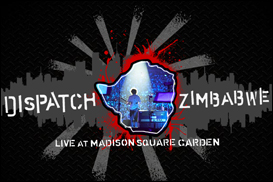 The release will include 2 hours of live concert footage and behind the
scenes interviews plus an exclusive 30-minute documentary on the devastation in the African country. "Dispatch: Zimbabwe – Live at Madison Square Garden" will be sold in eco-friendly recycled packaging and come with a ten-song companion CD of the band's favorite performances from the reunion dates. Inserted in each package will be a DropCard, allowing fans to download audio from "Dispatch: Zimbabwe – Live at Madison Square Garden." Technical pioneer Brett Eliason who was responsible for Pearl Jam’s landmark official bootleg programs mixed the recordings.

Applauded by Rolling Stone Magazine, Spin, MTV, The New York Times, Esquire, The Boston Globe and the Associated Press, among many others, Dispatch donated 100% of the net profits from the "Dispatch Zimbabwe" concerts to their recently founded Dispatch Foundation, earmarking the funds towards fighting disease, famine, and social injustice in the poverty stricken Zimbabwe. A portion of the net proceeds from "Dispatch: Zimbabwe – Live at Madison Square Garden," will also be donated to the Dispatch Foundation and its efforts in Zimbabwe. For more information, check out dispatchmusic.com and dispatchfoundation.org.

Known as the band that redefined independent music history, the members of Dispatch released album after album on their own label, rising up without the assistance of a major record label and selling over 600,000 albums. Dispatch became pioneers, making their reputation largely by touring, word-of-mouth and file sharing. The three nights at MSG, marked the band's first appearances together since their 2004 farewell show, which drew more than 110,000 fans from 25 countries, making it the largest independent music event in history. Coming together for a cause that's greater than anything that drew them apart, "Dispatch: Zimbabwe" not only raised funds to alleviate suffering in Zimbabwe, but also marked the first time an independent band sold out Madison Square Garden. –by CelebrityAccess Staff Writers