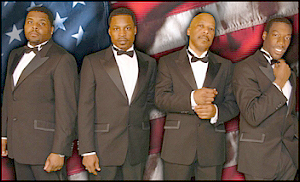 LONDON (VIP-NEWS) — Vocal group The Drifters have reached an out-of-court settlement with a band who were claiming to be them.

The band's lawyer said they now have the exclusive UK and Europe rights to perform using the name.

A court order has prevented the other performers from ever appearing as The Drifters again, he added.

The band, whose hits include Under The Boardwalk and Up On The Roof, have sold 114 million albums since they first appeared 55 years ago.

Moral victory
The Drifters, who were founded by George Treadwell and have run by his family since he died in 1967, have featured more than 60 members.

Their lawyer Tom Frederikse said the settlement was a "moral victory" for the Treadwells and "reaffirmed their right to the family business".

He added that the name Treadwell was the one constant theme in the band's long history.

They had threatened to take legal action at the High Court in London after it emerged more than one act was using the name.

The Drifters' name has also been the subject of a US wrangle, in which music promoter Larry Marshak was prohibited from using the name and the Treadwells were found to be its sole owners.

The current four-man line-up are on a 60-date UK tour, which will be followed by a new album, according to BBC