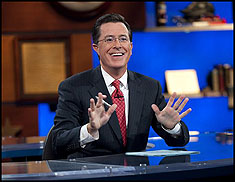 NEW YORK (CelebrityAccess) — The Federal Communications Commission has indicated that they are not planning to pursue action against late night talk show host Stephen Colbert over comments made during a May 1st broadcast of “The Late Show With Stephen Colbert.”

During the broadcast, Colbert joked that “the only thing [Trump’s] mouth is good for is being Vladimir Putin’s cock holster.”

While Colbert's joke occurred during the 'Safe Harbor' period where adult-oriented material is more permissible, and the offending word was bleeped while his mouth blurred, it immediately sparked an online furor and led to thousands of complaints to the FCC.

Said complaints fell on deaf ears and earlier this week, the FCC announced that after a review, they concluded that the remark did not rise to the level of obscenity or indecency to warrant any kind of sanction or fine.

“Consistent with standard operating procedure, the FCC’s Enforcement Bureau has reviewed the complaints and the material that was the subject of these complaints,” the FCC statement said. “The Bureau has concluded that there was nothing actionable under the FCC’s rules.”