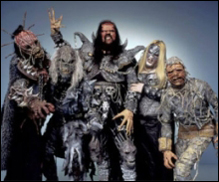 BERLIN (VIP NEWS) — The ultimate monster rock band in the entire Universe and highest scoring Eurovision Song Contest winner of all time Lordi will be a headliner at this year's Popkomm in Berlin.

Lordi will will be seen in their new monster costumes.

Popkomm, which takes place in October, attracts over 10,000 music business professionals from all over the world.

Lordi's appearance will support the release of their fourth studio album entitled Deadache, which will be released internationally on October 27th, 2008.

Rumor has it that the new album and new costumes will feature a stronger horror theme than ever before. Lordi will perform at K17 club in Berlin on Friday, October 10th.

Finnish music is all over Berlin.

This year's performances by a great variety of Finnish artists at Popkomm are a part of the Finnish music industry's "Helsinki in Berlin" marketing push.

In addition to Lordi, the following artists will be featured:

More bands and venues will be announced during August. Nearly 40 companies from Finland are participating in the export campaign which is organized by Music Export Finland and financed by the Finnish music industry, Ministry of Education, Ministry of Employment and the Economy, Finnish Foundation for the Promotion of Finnish Music (LUSES), The Finnish Performing Music Promotion Centre (ESEK), the cities of the Helsinki metropolitan area Helsinki, Espoo, Vantaa and Kauniainen, and Altia Corporation/Koskenkorva Vodka, the main sponsor. Laitilan Wirvoitusjuomatehdas is co-operating in the project.