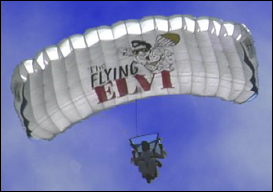 LAS VEGAS (AP) — A memorial is scheduled this month in California for a “Flying Elvis” who died of severe injuries including a broken pelvis suffered in a September skydiving mishap in Montana, a family member said Monday.

Paul Moran, 52, who lived in Canyon Lake, Calif., and skydived with the “Flying Elvi” skydiving troupe in nearby Perris, Calif., died Nov. 24 at HarborView Medical Center in Seattle, said his half-sister, Jane Blacow.

“This was not a joke as it had been perceived on all the Web sites and the newspaper articles,” Blacow said of broken bones and internal injuries that left her brother on a respirator since the Sept. 29 mishap. “It was a lot more serious than people thought.”

Moran crashed to the ground during a skydiving demonstration marking the opening of the Glacier Peaks Casino in Browning.

Members of the troupe said at the time that Moran apparently misjudged the landing before hitting a concrete parking lot at an estimated 50 mph.

Blacow said a memorial was planned Dec. 23 in Perris for Moran, a building contractor in Stockton and Canyon Lake, who had been a member of the Flying Elvi parachuting team for about 13 years. Blacow told the Las Vegas Review-Journal that her brother loved sports including sky diving, water skiing and snowboarding.