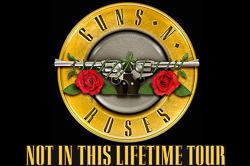 Well maybe in this lifetime.

It hasn’t been long since Kenny Chesney showed up in Pittsburgh and left a pile of drunken fans covered in garbage in his wake. It was a prime example of excess of concert goers, especially when it’s hot outside.

But to one up Pittsburgh – Guns N’ Roses Philly fans attempted to outdo their cross-state rivals by taking their debauchery up a few notches.

According to Philadelphia Magazine, the nastiness got started rather quickly and one woman fell victim within the first hour of the show — which started on time apparently:

Seriously, was there anyone at the Guns N’ Roses show that wasn’t completely inebriated? People were pretty clearly trying to relive their 20s, and it didn’t appear to be going well based on the number of middle agers I saw getting sick or on the verge of it.

One woman fell down drunk and pooped her pants, and that was within the first hour of the show. Excessive drinking, excessive heat, and excessive crowds are not a good combination.
showed up and played a decent show. (Philadelphia Magazine)