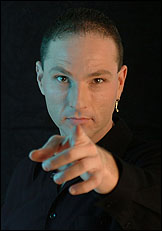 NEW YORK (CelebrityAccess MediaWire) — Although mentalism is a performance tradition that hearkens back to Vaudeville days, master mentalist Guy Bavli has completely re-imagined the art to create a more exciting, humorous and interactive form of entertainment. With a dynamic live performance, the audience members become the star of the show. This veteran performer has been honing an act infused with both passion and energy that is sure to leave a lasting impression on any audience.

Originally hailing from Israel, Guy Bavli first became interested in the art of Mentalism at the tender age of five and by the age of eight, he had a regular gig doing a weekly performance in the activity room of his local community center. The show was a hit and he kept the booking for over a year. When he was thirteen, he was frequently invited to open for international touring acts when they performed in Israel. By age fourteen, he became the first Israeli to win an international entertainment competition held in the U.S. He has also won the "Entertainer of the Year" award for three consecutive years. In 1990, Guy Bavli was the first ever to receive the award for "Entertainer of the Decade 80's – 90's" from the Israeli Society for Promoting the Art of Entertainment and remains a nationally-recognized celebrity in Israel.

Since then, Guy has taken his performances international. After some time in Las Vegas, Guy was invited to perform for a week at Caesar's Palace in Las Vegas. They were so impressed with his performance that they offered him a residency as a headliner which lasted for three years, during which Guy would do 5 shows a day, shows that were often SRO.

With over 1000 shows under his belt at storied Caesar's Palace, Guy has toured extensively as well, working with artists such as Johnny Logan, Bonny M, Howard Jones, and Kool and the Gang, in a both corporate and public performance settings, appearing in over 50 countries worldwide. He has also made hundreds of appearances on many popular television shows all over the world.

Guy has also been a key component in a number of very successful product promotions, most notably with Jaguar. While completely blindfolded, Guy skillfully navigates a brand new Jaguar X-Type through an obstacle course in front of an astonished live audience – a feat that attracted significant press and public attention to Jaguar's product roll-out.

Working with some of the biggest corporate clients out there, clients such as IBM, Coca-Cola, Delta Airlines and Microsoft, Bavli is skillful at tailoring his performances to match the needs of a client.

Guy is preparing to take his new show on the road. Combining Bavli's amazing perception, intuition and stage presence, the 90 minute show "Lets Go Mental" will focus on audience participation and feature live music, comedy, drama, suspense and amazing visuals. Watch as Guy appears to bend nature's laws, seems to effortlessly travels through time and accurately predicts your thoughts. Guy will amaze the audience as he helps them unlock the full potential of their minds while laughing their bellies off.

To learn more about the Let's Go Mental show, please visit Guy's website where you can get a sense of what his live performances are like and check out some video highlights. – CelebrityAccess Staff Writers