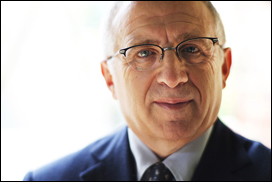 LOS ANGELES (Hypebot) – After uber-manager and music industry deal maker Irving Azoff exited as Chairman of Live Nation last year, one of his many moves was to form Global Music Rights as part of his Azoff MSG Entertainment, a new joint venture with the Madison Square Garden Company. There were rumors that some major songwriters including members of Journey, Foreigner, Fleetwood Mac and Soundgarden had signed on. Now its becoming clear what Azoff has planned for his growing song catalog, and it strikes at the heart of a marketplace dominated by BMI and ASCAP for decades.

Azoff has apparently been telling potential clients that he will negotiate royalties from radio stations and online music broadcasters that will be up to 30% higher then they are currently getting through ASCAP or BMI. This leak comes via the New York Times, who quote three anonymous sources.

How Will Azoff Collect 30% More?

ASCAP and BMI are bound by statue to offer pre-set blanket licences. But Azoff's Global Music Rights along with competitor SESAC are not bound by the same regulations, and are free to charge whatever the market will bear.

"What Irving did was look at what songwriters were earning historically and offer them a premium,” said Barry M. Massarsky, an economist who specializes in music publishing told the New York Times. “He believes he can carve out a higher value for those songs from radio and pay less in administration fees, so that ultimately the songs would make more money than they have from ASCAP or BMI.”

Some very prolific and profitable songwriters have bought Azoffs pitch including Pharrell Williams, Ryan Tedder, Benny Blanco, Shane McAnally, and the estates of Lennon and Ira Gershwin, in addition to the band members named above.

On the record Azoff would say: “I vowed when I started this company that I was going to take care of artists. So I tried to identify places where I felt that artists were not getting a fair deal, and the performance rights area jumped out at me. It was a place where I felt I could help our artists."