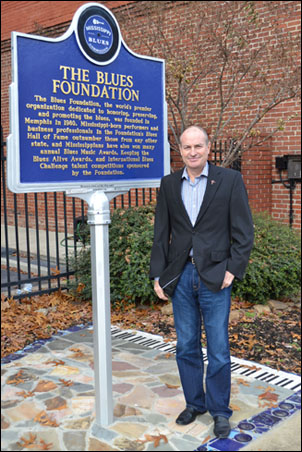 MEMPHIS, TN (CelebrityAccess) — Jay Sieleman, President and Chief Executive Officer of The Blues Foundation, announced that he will be stepping down from his post at the helm of the organization, effective September 2015.

Sieleman joined the Foundation in March 2003 and will leave as the longest serving executive in the Foundation’s 35-year-history. Under his leadership, the Foundation has enjoyed substantial programmatic and economic growth. The international status of The Blues Foundation has also increased and now has members in more than fifty countries.

Under Sieleman's guidance, the Foundation has enjoyed a prosperous decade, rowing from a net worth of less than $200,000 to over $4 million, annual revenues of $1 million dollars and positive net income each year since 2004. Individual memberships have tripled to 4000 and affiliated blues societies have more than doubled to 200.

Programming has also increased during Sieleman's tenure and the foundation stages its annual Blues Music Awards and the International Blues Challenge, latter of which has grown from three to five days and from 70 acts to 250. As well, the Foundation continues to provide as much as $50,000 annually to Blues musicians and their families for medical, dental and funeral expenses.

The Foundation is also on track to debut the Blues Hall of Fame, which is set to officially open in May, 2015.

Sieleman did not reveal his reason for stepping down, or his future plans after his exit. – Staff Writers